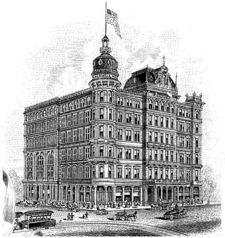 The Caldwell Hotel, designed by Sidel in 1886 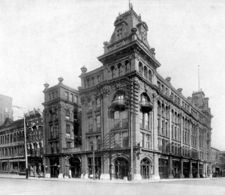 The Morris Hotel, designed in 1888

Edouard Sidel (born 1858 in Paris, France; died December 25, 1889 in Paris) was an architect residing in Birmingham for a few years before his early death.

Sidel, the son of a stone contractor, grew up in Paris and studied architecture there at the École des Beaux-Arts. After graduating he toured Europe with his sketchbook under a governmental stipend, reporting to the Minister of Education. He was employed in London before immigrating to New York in February 1883 to pursue his fortune. Soon he was engaged in preparations for the World's Industrial and Cotton Centennial held in New Orleans in 1884, and made his way to Louisiana, where he was awarded a gold medal for his efforts. He briefly considered moving to Panama, but soon returned to the United States due to ill health.

Before returning to New York, Sidel visited the booming city of Birmingham. He met with Henry Caldwell, who invited him to submit plans for the Caldwell Hotel, which the Elyton Land Company was proposing. He delivered plans on April 15 which were quickly accepted. Thus established, he was commissioned by Josiah Morris to design the Morris Block three blocks west. He was assisted in Birmingham by another architect from New Orleans, Lawrence Buck, who remained here in partnership with A. J. Armstrong. Sidel returned to New Orleans to marry Jeanne Legras, daughter of a sculptor, on August 25, 1886.

Sidel was a regular contributor to The American Architect and Building News and joined the American Institute of Architects as an associate member. His health failed in 1889 and he returned home to Paris to convalesce, but died of consumption at the age of 31 on Christmas Day.