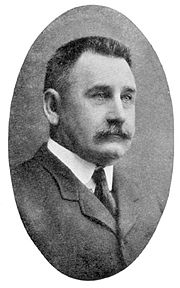 Edward Magruder Tutwiler (born October 13, 1846 in Fluvanna County, Virginia; died April 19, 1925 at sea) was a civil engineer working for the Georgia Pacific Railroad. He settled in Birmingham and became a mining engineer and developer. With John A. Montgomery he founded the city of Leeds east of Birmingham along the Georgia Pacific corridor. After selling his Tutwiler Coal, Coke, and Iron Company to Birmingham Coal and Iron, he invested the proceeds from the sale to build the first Tutwiler Hotel (1914), and the Ridgely Apartments (1914) in downtown Birmingham.

Tutwiler was born at Palmyra in Fluvanna County, Virginia in 1846 to Colonel Thomas Harrison Tutwiler, a state legislator and Commonwealth's attorney and his first wife, the former Harriet Magruder Strange. His family name was originally Duttweiler, changed to Tutwiler in the 18th century. His grandfather, Martin, served under General Cockes in Virginia during the War of 1812.

After 6 years at the Palmyra school, Edward entered the Virginia Military Institute to study civil engineering. As a member of the VMI Corps of Cadets he fought in the Battle of Newmarket under General Breckinridge's orders. He served at the front until the end of the war and then returned to his studies, graduating in 1867.

In 1869, after working two years as a private tutor, Tutwiler took a job as a rodman for the Lehigh and Susquehanna Railroad. He progressed through various positions with different railroads and served for a time as assistant city engineer for Cincinnati, Ohio. He married the former Mary Fendlay Jaffray of Crittendon, Kentucky in 1876 before joining the Georgia Pacific and journeying to Alabama.

Tutwiler was assistant chief engineer of the Georgia Pacific Railroad and came to Birmingham. In 1881 he purchased the Wilburn Little farm near Cedar Grove, just south of the new Henry Ellen coal mines owned by Henry DeBardeleben. In 1882, with fellow engineer John Montgomery, Tutwiler laid out the street grid for what is now downtown Leeds on his land flanking the tracks. They promoted the new development by running special excursion cars on the railroad from a streetcar stop at Capital Park downtown.

In 1883 Tutwiler was appointed superintendent of 13,000 acres of mineral land purchased by the Richmond and Danville Construction company, organized by John T. Milner in 1879, which was building the railroad. This property, developed by Milner, was connected to the new railroad and reorganized as the Coalburg Coal and Coke Company. Tutwiler oversaw development of new mines at Brookside, Blossburg, Cardiff, and Brazil. Contemporary accounts of "The Major" attest to his close and caring supervision. He lived in a cabin among the laborers (oftentimes convicts) at Coalburg and attended every meeting of the workers, trying to address their concerns and avoid unrest. Mary Tutwiler died in 1885 in Coalburg and was buried in the Tutwiler family plot at Oak Hill Cemetery. The couple had four children, Temple Wilson (1879), Edward, Jr (1880), Herbert (1882) and Ernest Strange (1884), who died at age 12 and is also interred at Oak Hill.

In 1887 he also oversaw the sale of the company to Sloss Iron and Steel Company and worked for Sloss for two years as superintendent of mines. After resigning, he continued to operate the same mines under lease while he accumulated property to found his own iron and coal company. He served as one of the directors of the North Birmingham Land Company that developed North Birmingham. The new city included a Georgia-Pacific railyard in addition to two Sloss blast furnaces. 1887 also saw his marriage to the former Margaret Lee Chewning in Charlottesville, Virginia.

Tutwiler founded the Tutwiler Coal, Coke & Iron Company in November 1893. He acquired the newly-build Vanderbilt Furnace in 1897, along with 36,000 acres of mineral properties, including 16,000 acres over the Pratt Coal Seam. which was incorporated into the Birmingham Coal & Iron Company in 1906.

Tutwiler contracted pneumonia in May 1924. After months of bed rest, he undertook a sea voyage with his wife in hopes of restoring his health. In December of that year they departed for India, where their son Temple was working as head of the Tata Iron & Steel Company. After visiting with him there, they returned aboard the "Empress of France". Tutwiler died during the passage between Japan and the Hawaiian islands on April 19. He is interred at Elmwood Cemetery. His widow, Margaret, returned to Virginia and died in 1940. Her remains were returned to Birmingham to be interred alongside her husband's.

According to the management of the current Tutwiler Hotel on Park Place, the spirit of Colonel Tutwiler haunts his namesake building. He is said to be particularly fond of the kitchen, where he once made himself a full meal and left the kitchen a mess, and the 6th floor, where he is heard knocking periodically on the door to room 604. The Tutwiler's bartenders still end each evening by calling out "Good night, Colonel. Please leave the lights and stoves off, and don't make a mess."