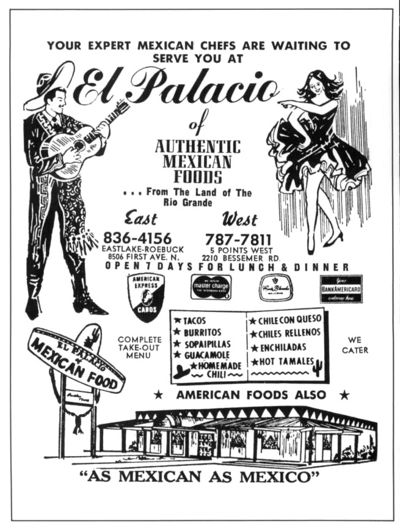 El Palacio of Mexican Food is a Mexican restaurant chain founded in Amarillo, Texas in 1962 by Jimmy and Nonie McClure. The second location opened in Huntsville, Madison County in 1966. In the following years, the chain expanded across the South.

The chain peaked around 1972 with almost 60 restaurants. At that time, the Birmingham District had locations on 1st Avenue North in East Lake and on Bessemer Road at Five Points West. Later locations included Homewood, Irondale and Hoover.

In 1972 the Back Door Lounge was located in the back of the East Lake El Palacio location. The Hoover location, later used by Mexico Lindo Autentico restaurant, was damaged by a fire in July 2018.