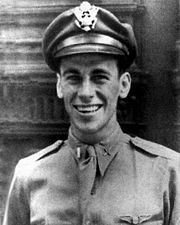 Dent, the son of Brooklyn Dodgers pitcher Eddie Dent and his wife Eleanor, grew up in Birmingham and attended the University of Alabama. He enlisted in the Aviation Cadet program of the U.S. Army Air Force on January 29, 1942. He was commissioned a Second Lieutentant and awarded his wings at Napier Field is Dale County, Alabama. He completed his training on a P-40 Warhawk at Drew Field near Tampa, Florida and was assigned to the 7th Fighter Squadron of the 49th Fighter Group, active in New Guinea, in May 1943.

Over the next 18 months, Dent, now a Captain, flew 235 combat missions. He was credited with downing six enemy craft in aerial combat (three flying a P-40, and three in a P-38 Lightning).

Dent led a patrol of four P-38s which engaged a group of Japanese fighters escorting a convoy on November 1, 1944. He downed three of their fighters before he was shot down by anti-aircraft fire from a destroyer. He parachuted into the sea, avoiding capture. He was rescued that night returned to his unit two weeks later. For his heroism that day, Dent was awarded a Distinguished Service Cross. He then returned stateside as an instructor at Drew Field and the Sarasota Army Airfield. He received his discharge on December 8, 1945.

In 1946 Dent joined the Alabama Air National Guard in Birmingham and served in the Air Force Reserve from 1949 to 1953. Meanwhile he founded the Drew Insulation Company and, in the mid-1970s, went into the promotional goods business in association with Forrester-Smith Inc.

Dent, a parishioner of St Stephen's Episcopal Church, died in 1993. He was survived by his wife, Mary, and three children, Elliott Dent Colebeck, Sally (Summerall), and Susan (Webster). He is buried at Elmwood Cemetery.