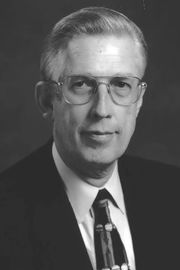 Harris was born to Alton and Lera Mae (Mitchell) Harris and graduated from Chilton County High School in Clanton. He found employment as a co-op student with Alabama Power in 1958 while he was an engineering student at Auburn University. He graduated with a B.S. in 1962 before going to flight school in the U.S. Air Force Reserves, finishing in 1964. He returned to Auburn to earn his M.S. in 1968 and M.B.A. in 1970. That same year he attended the Air Command and Staff College at Maxwell Air Force Base and, fifteen years later, studied at the Air War College.

Throughout this time he also rose through the ranks of Alabama Power, and was ultimately named President and CEO by the Board of Directors in 1989. His term was noted for aggressive efforts at economic development, including the founding of the "Economic Development Partnership of Alabama," which has been at the center of the efforts to lure Mercedes-Benz, Honda, and Boeing to the state. Most of his lobbying was done behind the scenes rather than in the media. He retired from Alabama Power in 2002 but has continued to be active on various boards.

As one of Birmingham's most noted business leaders, Harris served as a trustee of the Alabama 4H Council, the Association of Independent Colleges of Alabama, the Auburn University Foundation, the Boy Scouts of America, Samford University, Dawson Memorial Baptist Church and numerous other organizations. He also served as a member of the boards of AmSouth Bancorporation, the Southern Electric Generating Company, Junior Achievement, and others. Throughout his career he has campaigned for improvements to education in Alabama and the United States.

In 1998 Harris served on the Steering Committee for the Metropolitan Area Projects Strategy (MAPS) campaign. He also led Don Siegelman's transition team that year. In 2002 he was named an Honorary Consul General of Japan. He leads Alabama's "Center for Public Policy" which campaigns for constitutional and tax reform. In 2003 he was named to the Auburn University Board of Trustees. In 2004 he was mentioned as a possible candidate for the 2006 Governor's race, but did not run. Harris was inducted into the Birmingham Business Hall of Fame in 2021.

With his wife, the former Glenda Steele, he resides in Birmingham and has two children and six grandchildren.