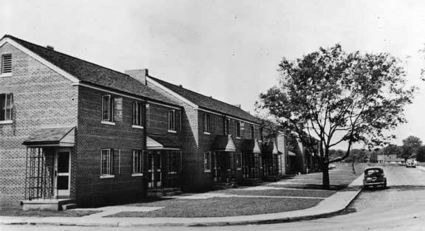 Elyton Village is a public housing project operated by the Housing Authority of the Birmingham District located at 31 4th Court West in the Graymont neighborhood of the Smithfield community, just south of Legion Field.

The project was completed in the early 1938 and was intended for occupation by white families. It was built on the 39.5 acre plantation owned by Samuel Earle and later known as the Earle-Greene plantation. It was acquired for $329,000 by the United States Housing Authority. The Wreck-A-Pair Building Company won the contract to demolish existing structures. The Perusini Construction Company won the $123,423 contract to install foundations for the new homes. Even though the USHA directed that the scope of the total construction project be broken into smaller bid packages to encourage local contractors to apply, not enough answered the solicitation and a lump-sum bid by J. A. Jones Construction of Charlotte, North Carolina was contracted for the work with a total bid of just under $3 million and an agreement to employ local laborers, subcontractors, manufacturers, fabricators and suppliers in the work "wherever possible".

Elyton Village served as home to Tammy Wynette and her three young daughters when she came to Birmingham after leaving her first husband.

A $13.7 renovation began in 2007 and was completed in early 2012 amidst numerous delays. Wild Building of Morristown, Tennessee performed the work, which included demolition of nine buildings and the gutting of others. Lead paint and asbestos were removed and new appliances, HVAC and sprinkler systems were installed. Additional planned renovations are dependent on federal funding.

The Birmingham Police Department entered into a "Community Safety Partnership" (CSP) with the Housing Authority in 2019. The program, modeled after a similar initiative managed by Chief Patrick Smith in Los Angeles, California, includes increased police presence and community engagement. The CSP was credited with a 55% decrease in crime at Elyton Village, along with smaller reductions in other communities.