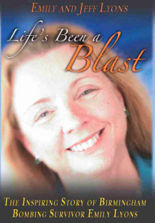 Emily Lyons (born July 18, 1956 in Montgomery) was director of nursing at the New Woman All Women Clinic and was badly injured in the 1998 bombing carried out by Eric Robert Rudolph.

Lyons earned her bachelor of science in nursing, with a concentration in reproductive health, from UAB in 1977. She worked in several areas of nursing and also taught at the University of Arkansas in Monticello before returning to Birmingham.

She had just arrived at work on January 29, 1998 when Rudolph set off a nail bomb that killed off-duty police officer and clinic security guard Robert "Sandy" Sanderson. Her injuries were nearly fatal and have required 22 surgeries.

Since the bombing, Lyons has become an active campaigner for women's reproductive rights and against violence aimed at reproductive health providers. She testified before a Congressional subcommittee which was considering legislation that would limit the government's ability to investigate and prosecute groups that planned attacks against clinics. She was the featured speaker at the 1998 national meeting of Planned Parenthood and has lectured frequently for the National Abortion and Reproductive Rights Action League (NARAL). He has been awarded the "Margaret Sanger Woman of Valor" award from Planned Parenthood and the "Gloria Award" from the Ms. Foundation.

In 2003 Lyons was awarded $115,000,000 in a civil suit against Rudolph, primarily insuring that he would be unable to profit from his crimes. So far she has received $57.69 of this amount. In 2005 she and her husband, Jeff, completed a memoir entitled Life's Been a Blast, which they published themselves.