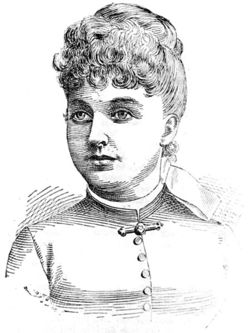 Emma had been considered one of the beauties of Atlanta in the late 1870s. She and Hawes eloped at the home of a minister, against the wishes of her father, Colonel William Pettis on June 8, 1879. She was disowned until her father forgave her on his deathbed, leaving a property worth $18,000 to the couple.

Hawes suspected his wife of infidelity. One day he told her he was to leave on a run on the Atlanta & West Point Railroad but secretly returned to his house that night and chased a young man named Mike Cain out of the bedroom. Both Cain and Hawes were arrested for disorderly conduct. Cain skipped on his bond and the matter never went to trial. Hawes initiated divorce proceedings, but the couple reconciled and moved to Montgomery, and later to Birmingham. She had signed over her inherited property to her husband and he sold it and invested in land in Birmingham. Emma reportedly became dependent on alcohol during this time and sometimes sent her oldest daughter, May, to procure it for her.

Emma Hawes and her two daughters were murdered by him during the weekend of December 1, 1888. Her body was found in the lake at Lakeview Park on December 8. The discovery led to a lynch mob gathering to kill Hawes, already imprisoned for the murder of May, whose body had been found in East Lake on December 4. Emma was buried, along with her daughters, in unmarked graves at Oak Hill Cemetery.