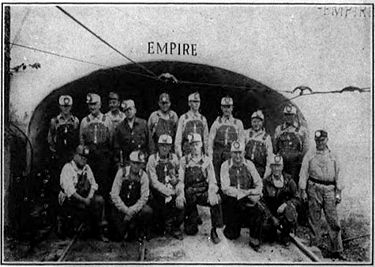 A group prepares to enter the Empire Mine in 1940

The Empire Mine is a coal mine near the Empire community in Eastern Walker County, north of Sumiton, between the Little Creek and Old Town Creek tributaries of the Sipsey Fork. The mine was opened by the Empire Coal and Coke Company to access the Black Creek and Jefferson seams of the Warrior coal field. Coal from Empire was freighted on the St Louis & San Francisco Railroad via a spur from Bergens or loaded onto barges at Coyle on the Warrior River.

The Empire Coal and Coke Company was founded by Henry Milner and the firm of Rogers, Brown & Company, amassing 14,000 acres surrounding the present community. They did little, however, to develop the mine, with peak annual output of 50,000 tons.

In 1904 the Empire Coal Company was organized by Frank Nelson Jr and the bankers Sigfried and Burghard Steiner with $640,000 in capital. They invested $200,000 immediately in the construction of surface works and the purchase of equipment. An endless-rope hauling system was installed on a two-track main slope. The wall was supplied with 25 undercutting machines and conveyors. Two Ingersoll compressors and fans were installed for ventilation. Coal washers and revolving screens separated slack from higher grade lump coal. 100 beehive coke ovens cooked the slack on site.

Output was increased to 200,000 tons annually, making it the most productive mine on the Black Creek seam. The firm's headquarters opened in the new Brown-Marx Building when it was constructed in 1906. Former state mine inspector J. M. Gray was hired as mine superintendent in 1909.

The Empire Company merged with Henry T. DeBardeleben's Maryland Coal and Coke Company and the Corona Coal Company in 1922 to form the DeBardeleben Coal Corporation. Miner Joseph Bishop was killed in a rare explosion at Empire Mine in December 1930.

In October 1944 miners at Empire went on strike, without UMWA support, to force the removal of a particularly hated foreman.

Beginning in 1953, the Empire Mine was converted to a surface (strip) mining operation.