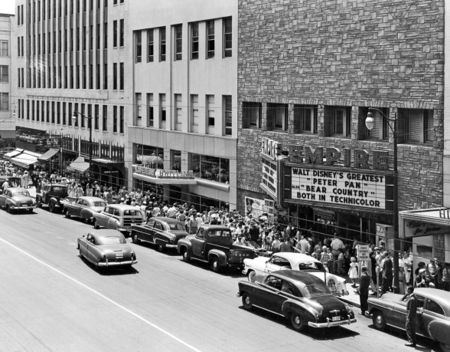 A line of people waiting outside the Empire Theatre in 1953

The Empire Theater was a movie theater located at 2012 3rd Avenue North in the former D. M. Drennen & Co. general store from 1927 to the early 1980s. It was owned and founded by Sallie Wise, widow of theater magnate Marvin Wise.

While the theater was under construction in December 1926, manager Charles Merritt got into a physical dispute with night watchman C. F. Perdue. Perdue claimed that he had objected to Merritt, "bringing women into the building at night." Merritt, "denied mention of women in the conversation," and claimed the argument was over Perdue's failure to accomplish his duties, and that he struck him in self-defense.

The Empire opened on January 21, 1927 with the novelty of live stage acts as openers for its motion picture programs. Its "Gala Opening Week Program" included Spanish vocalist Nita, Hurtado's Marimba Band, and the Dawn Sisters on stage; followed by screenings of "Her Big Night" starring Laura La Plante and "Raggedy Rose" starring Mabel Normand. E. Vallani's 12-piece Empire Orchestra gave a special program, along with organist H. G. Grieb. Another novelty of the house was a mezzanine art gallery displaying the work of local artists. The theater housed a "lounging room" for patrons, which was equipped with telephone booths.

Regular admission prices were 50 cents for the main floor, 65 cents for loges, 35 cents for balcony seats, 25-cent matinees, and 10-cent children's tickets. In February the Empire hosted a demonstration of the 2-ton "Auditorium Model" of the Orthophonic Victrola phonograph. In March the theater screened a record-breaking week-long revival of D. W. Griffith's "The Birth of a Nation" accompanied by the Empire Orchestra, led now by Bert Hollowell. All spring the Louis Saks Store used the Empire's auditorium for fashion shows with live models and music by Jack Linx's band. The theater closed briefly for rehearsals before the summer season, which featured a house company, the "Empire Players" led by Jack Gee Van and accompanied by a chorus line dubbed "Van's Pippins" who were choreographed and trained by Pierre Dale. The "Hello Birmingham" program included comedy by Oliver Wright and vocal solos by soprano Eunice Gilman. The live acts accompanied a screening of "Moulders of Men," a showcase for the work of the Benevolent and Protective Order of Elks, starring Conway Tearle and 8-year-old Frankie Darro.

By July the Empire had reduced its regular prices to 25 cents for general admission, 15-cent matinees, and 10-cent children's tickets. In September the Empire presented a live play-by-play "from the direct wire" of the 1927 Birmingham Barons series against the New Orleans Pelicans for the Southern Association pennant. The feature film "On Ze Boulevard" with Dorothy Sebastian was screened between the morning and afternoon games. The fall theater season was headlined by the "Jackson Players", and marked later in the year by another cut in prices.

On July 5, 1928 Tuskegee Institute scientist George Washington Carver gave a presentation, sponsored by the Birmingham Chamber of Commerce, on the industrial uses of the sweet potato and the peanut. Another speakers at the Empire that summer was Representative George Huddleston, "on the question of conscription of capital and labor." On August 5 the Empire hosted an amplified live radio address from Jehovah's Witnesses leader Joseph Rutherford, broadcast from Detroit, Michigan. Later that month the Independent Bible Class began staging "comedy concerts" at the Empire Theater.

In September 1928 Loew's Inc. announced that it could not advance more investment capital to the Birmingham Amusement Company and that Loew's Temple Theater would be closed on the 15th of that month as a result. The city lost a stop on the Loew's Vaudeville circuit while the Empire "reopened" on October 1 to begin showing Metro-Goldwyn-Meyer pictures on a first-run basis. The opening night feature was "While the City Sleeps" with Lon Chaney Jr. Bert Hollowell, who had earlier served as music director for the Empire, was named manager of the theater in December 1928. In April 1929 Marvin Wise Theaters general manager Frank Merritt accepted the resignation of house manager Tom Allen. That December Roderick Bellow delivered an address on "Alabama History" as part of the Birmingham Park and Recreation Board's "Alabama Day" exercises. C. D. Haug came over from the Strand Theater to manage the Empire in January 1930.

In the summer of 1931 many of Birmingham's theaters closed when owners could not reach an agreement with unionized workers. The Empire began hosting Sunday services for Trevor Mordecai's newly-formed Congregational Community Church. Merritt and Haug finally resumed operating the Empire as a movie house on November 2, with a presentation of "The Unholy Garden" starring Ronald Colman. Several theaters which reopened with non-union employees were targeted by a, "racketeering reign of terror," which included tear gas and stink bombs, and at least two incidents where large snakes were turned loose during shows. A 5 1/2-foot Coachwhip was found in the Empire on November 30, during a screening of "The Road to Singapore" with William Powell. Merritt, who had been negotiating wage increases with union members, broke off talks after an earlier snake release at the Galax Theatre.

In 1935 Acme Theatres purchased the Empire Theater property from the Catherine Cahalan Wheeler estate for $113,000. The owners installed a new air-conditioning system in 1937. The facade of the theater was modernized with cast-concrete "Perma-Stone" siding and a new two-sided backlit marquee.

Dwight Knight was manager of the Empire in 1960.

In late 1964 the theater was renovated with new "rocking chair" seats, a new, wider projection screen, and new lobby and lounge areas in a gold and cream color scheme. The theater held a grand re-opening on February 15, 1965, hosted by manager Arlie Miller and Acme Theaters general manager John Douglas.

As business activity moved to the suburbs, the Empire's prestige rapidly declined. It closed in the early 1980s and the building was demolished in 1984.