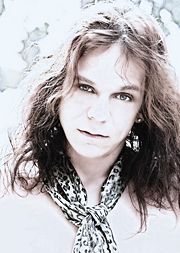 Eric Dover (born January 19, 1967 in Jasper) is a glam-rock guitarist and singer, most notably with Jellyfish, Slash's Snakepit, and Alice Cooper. It has been falsely rumored that he holds the Guiness Book of World Records title for "largest mouth span."

Dover began playing guitar at 11 years old. He started playing around town wherever he could. He shared the stage with Kim Boyce and was in the group The Extras with drummer Scott Collier in the mid 1980s. The core of that band split off to form the outfit Love Bang through the later part of the decade.

In 1993 he joined Jellyfish on tour after the release of "Spilt Milk". The group disbanded in 1994. and Dover joined bandmate Roger Manning in the group Doverman. Dover and Manning have cameos as part of Davy Jones' band in the 1995 Brady Bunch Movie.

Before that group went into the studio, Dover auditioned as a singer for a side project for Slash of Guns N' Roses. Dover recorded lead vocals on the Snakepit album It's Five O'Clock Somewhere before rejoining Manning in the re-named Imperial Drag.

After that group broke up, Dover appeared on several albums as a session musician before joining Alice Cooper's band for the "Brutal Planet" tour in 2001. He played on 2001's Dragontown and is co-credited with Cooper and fellow guitarist Ryan Roxie on most of the tracks of the 2003 album The Eyes of Alice Cooper. He left the band following the tour for "Eyes of Alice Cooper". Fellow Birminghamian Damon Johnson won the audition to replace him. Dover went on to frequently appear with other member's of Cooper's band as GlamNation.

Currently, Dover has adopted the alter-ego "Sextus" and fronts a group of the same name. He is married and lives in Los Angeles.