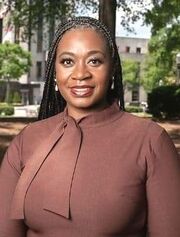 Erica Lastar "Star" Robbins (born December 9, 1981 in Munford) is the founder of Be A Blessing Birmingham and a candidate for Birmingham City Council District 5 in the 2021 Birmingham municipal election.

Robbins was one of seven challengers running against incumbent Johnathan Austin for District 5 in the 2017 Birmingham municipal election. She pledged to work to address poverty, homelessness and mental health while also encouraging business growth and job opportunities. She finished 7th in the race that was won by Darrell O'Quinn in a runoff.

Early in the 2020 Coronavirus pandemic her organization raised $60,000 to provide a mobile showering station to serve homeless persons. The initiative was recognized by the Birmingham Urban League and Robbins was honored by Women Shaping Alabama and as a "Leader in Diversity" by the Birmingham Business Journal.

In challenging O'Quinn in the 2021 council race, Robbins has pledged to listen to constituents and expand resources for mental health, to foster partnerships between schools and mentorship programs, and to encourage entrepreneurship.

Robbins has one son, Aiden.