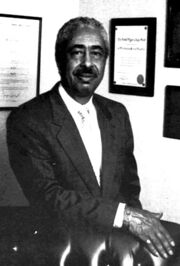 Faush graduated from Parker High School where he was also an assistant band and choir director. He earned his bachelor of arts from Faith College and a master of science at Alabama State University. He studied broadcast communications at the University of Denver and graduate studies at Alabama A&M University in urban planning and community planning. He also completed a master of divinity from Union Seminary and a doctorate in divinity from Livingston College in Salisbury, North Carolina.

Faush was already an active minister in 1950 when he was invited to join WATV-AM as a part-time announcer, soon recognized as having "the sweetest voice this side of heaven." He moved to the newly-launched WBCO-AM in 1953 as program director, and launched his popular "Gospel Cavalcade" program, which he later co-hosted with Shelley Stewart.

When WATV was forced out of its studios on the 20th floor of the Thomas Jefferson Hotel in 1976, Faush and Stewart formed Birmingham Ebony Broadscasting to purchase and operate the station from new studios at 3025 Ensley Avenue. They sold the station to Sheridan Entertainment in 2002.

Faush and his wife, Audrey had three children, Brenda, Anita, and Erskine Jr.

Faush served on the Executive Board of the Governor's Economic Council, on the Alabama State Minority Business Enterprise Board, on the National and State Associations of Broadcasters, as a board member of the Private Industry Council, and as a trustee of the Birmingham Chamber of Commerce. He was inducted into the Alabama Broadcasters Association Hall of Fame in 2013.

Faush died in April 2020. Due to the 2020 Coronavirus pandemic his memorial service was attended only by family members, but was also streamed live on social media.