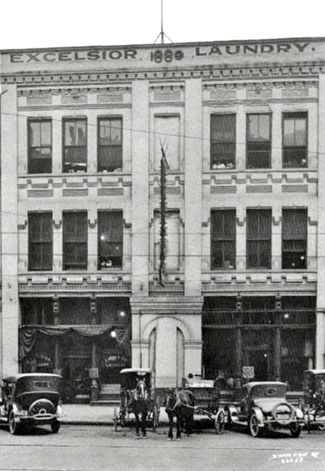 The Excelsior Steam Laundry was a prominent clothes and linen cleaning service in downtown Birmingham from the 1880s to at least the 1920s.

The laundry was purchased that same year by Covington, Kentucky native George Blinn Sr, who, along with his son, George Jr reincorporated the business on February 25, 1887.

They moved it to leased space at 1807 2nd Avenue North in 1891. In 1902 they acquired ownership of that building and the adjoining property at 1805 2nd Avenue. They remodeled the facade and rechristened it as the Excelsior Laundry Building

In 1905 George Blinn Jr invited his brother-in-law, James Donnelly, a former manager at Proctor & Gamble who had retired at age 43, to come to Birmingham and join him in the laundry and other business enterprises.

The Excelsior Laundry Building was demolished for expansion of the New Ideal department store before 1942.