Watercolor rendering of the Plaza by D. A. Gregg 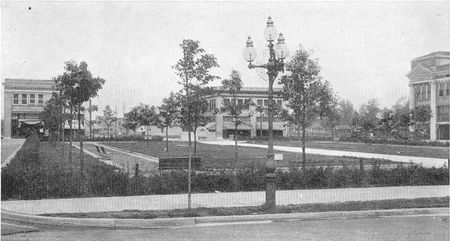 The Plaza, seen from the southwest in 1913

Fairfield Memorial Park, originally The Plaza is an urban park located on Lot 42 of the Fairfield Land Company's first subdivision of Fairfield (originally named "Corey"). It was intended as the municipal center of the planned city, facing Gary Avenue at Crawford Street, where the No. 5 Ensley-Fairfield streetcar line passed.

The park was planted with four rows of shade trees and a tiled fountain with benches, designed by Warren & Welton, was constructed at the northeast end. The park presently houses four wooden gazebo structures.

The city's first important buildings, designed by Warren & Welton, were erected flanking the park. The First Bank of Corey and Plaza Hotel to the south, and the Stowers Furniture Company to the north. A town hall was proposed for the southwest end of the park, on the site of the present baseball field in the neighboring Fairfield City Park. Both have since been demolished.

Former President Theodore Roosevelt gave a public speech to a crowd of 1,500 in the Plaza in March 1911 during his visit for the 1911 National Child Labor Committee Conference in Birmingham. He took the opportunity to praise Corey's planners for their attention to "men, as well as machinery."

In 1966 the Fairfield Chamber of Commerce proposed to have the plaza paved for automobile parking, in an effort to attract visitors to the city's business district. The Fairfield City Council passed a resolution to allow them to undertake the project at their own expense, but Robert Jemison Jr led a group of residents in opposing the city's action, arguing that the designation of "Plaza" was the same as dedicating the space as a public park. The city retained Frank Parsons to seek a declaratory action from the Alabama Supreme Court to clarify the matter.

During the proceeding one longtime resident, Joseph Trucks, described the various uses and improvements to the park over the years. He said that it had hosted "counter fairs", Nativity scenes, Summer band concerts and numerous political speeches and rallies. Over the years the Fairfield Garden Club had planted flowers in the Plaza, but the city had recently torn out hedges and shut off water to the fountain. Nevertheless, it was used daily by pedestrians and roller skaters.

Jemison explained that the Plaza was, "developed at the expense of the company...as a feature and a point of interest in the downtown section of Fairfield where the public would have a place to assemble and where public meetings could be held and where people could get on and off busses and have a place in the center to assemble. And we could have made more money for our stockholders by not going to the expense of developing the Plaza." Asked directly whether there was a difference between the two, Jemison testified that, ""either one is a public space and is a dedication of that space to the public."

The court found that the designation of the Plaza and its continuous use by the public did constitute a conveyance of that property as a grant to the public.