Fairview is a neighborhood in Birmingham's Five Points West community. It lies north of the Alabama State Fairgrounds, Central Park and Rising-West Princeton, south and west of Bush Hills, and east of Ensley Highlands. The entire neighborhood is in Birmingham City Council District 8.

Gerri Robinson is president of the Fairview Neighborhood Association. Dwight Hampton is vice-president and Simonetta Perdue is secretary. The association meets on the 1st Tuesday of each month at the Birmingham Police Department's West Precinct at 2236 47th Street West.

After the closure of Fairview School, there are no public schools in the neighborhood. School-age residents attend Minor Elementary School, Bush Hills Academy, and Jackson-Olin High School. The former school site on 29th Street West was used as the site for eight new houses constructed during a Home Builders Blitz in June 2006.

Notable churches in Fairview include Sardis Baptist Church, Fairview Methodist Church and The Church at Fairview. Fairview Park is in the southwestern part of the neighborhood, at 2501 28th Street Southwest. 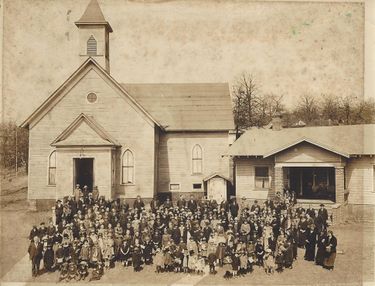 In the center of the community was a spring that flowed into Village Creek. The Seminole chief Osceola was known to camp in the area in the early 19th Century- around 1820 or so. The street car stop near the fairgrounds was named Osceola Station in his honor.

Principal neighborhood businesses included Camp's Confectionary, a store owned by John and Addie Camp, and McKelvey-Sandefur Groceries, owned by two of the founding families of the Birmingham area. Also in the neighborhood were the Thomas Drug Store, Cannon's Grocery, Fairview Station, and The Old Maids' Store, a small store run by two spinster sisters.

The people of Fairview were proud of Vulcan while it sat at the Fairgrounds and, according to a diary written by long-time resident Margaret McDaniel Ketcham, they felt like they had lost a friend when Vulcan was moved to Red Mountain in 1939.