From Bhamwiki
(Redirected from Famous Theatre)
Jump to: navigation, search 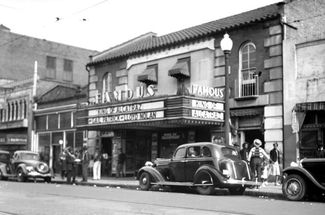 The Famous Theater in the 1940s 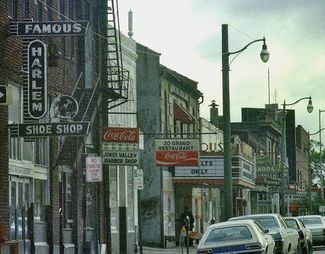 The Famous Theater is a former cinema located in the historically-black Business District at 1721 4th Avenue North in Birmingham.

In 1922 the theater was owned by P. A. Englor the white manager of the Champion Theater nearby, but staffed by African-Americans. During the silent film era, most features at the Famous were accompanied by a pianist while Wilson Driver played drums, provided sound effects, and sang. In 1925 a guidebook gave the theater's address as 306 18th Street North.

In the 1970s the theater showed adult films. After the theater closed, the building housed the offices of the Birmingham Urban League until 2001.

In 2006 attorney and architect Nolanda Hatcher Bearden purchased the vacant building for $250,000 and gutted it. Beginning in 2008 she redeveloped it as a residence for herself and offices for her architecture firm, NHB Group. The building also has two other office spaces and three additional residential units for lease. The project was supported by $10,000 in city-backed incentives.

In 2015 Hatcher merged her firm with Hoskins Architecture, with offices in the theater building.