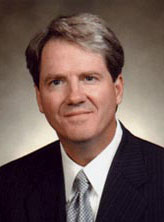 St John graduated earned his undergraduate degree in history at Alabama in 1978 and completed his law degree in 1982 at the University of Virginia in Charlottesville. He clerked with Judge Peter Fay in the 11th Circuit United States Court of Appeals for a year and currently practices with the firm of St John & St John, LLC in Cullman. He also co-founded Cullman Environmental and chairs the boards of directors of Southern Community Bancshares and First Federal Savings & Loan.

St John was appointed to the University of Alabama Board of Trustees, representing the 4th Congressional District of Alabama, in 2002 and served as president pro tem in 2008 and 2009. In 2011 St John wrote a letter to Janice Ward, president of the UAB National Alumni Association, in which he chided UAB for taking its focus away from medical research to pursue plans for an on-campus football stadium.

St John was named as interim chancellor after Ray Hayes stepped down in 2018.