The Finley roundhouse is a former railroad roundhouse built for the Southern Railway at its Finley Memorial Yard north of downtown Birmingham. It was constructed in 1915 near the Center Street entrance to the yard site, north of Finley Avenue. It is one of two roundhouses that survive in Birmingham and the largest surviving structure of its type in Alabama.

The roundhouse was built with 25 engine berths, arrayed around an open-air turntable. The curving building is 92-feet deep, with a raised central section providing space for large clerestory windows to illuminate the work area. It was constructed of reinforced concrete with a tar and gravel roof and a shop floor of creosoted wood blocks over a 5" thick concrete slab. The deck-type turntable operated a 90-foot section of track.

The yard was dismantled in 1952 as Southern moved its operations to the Norris Yard in Irondale and sold the property to the American Cast Iron Pipe Company (ACIPCO) and the Alabama Farmers Market. The roundhouse remained on the property acquired by ACIPCO. 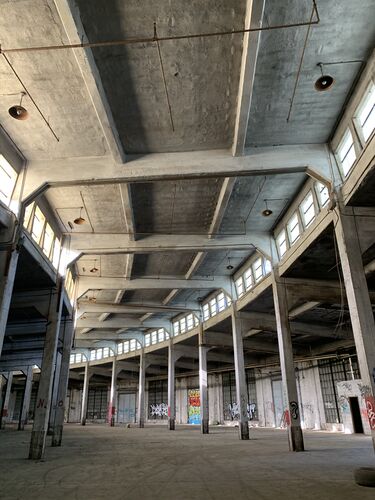 In the mid 1950s, ACIPCO sold the unused structure to the Shaw Warehouse Company, which used it for food storage. They raised the interior floor level with a new concrete slab, converting the locomotive bay entrances into truck docks, and constructed a spur track for refrigerator cars to be unloaded at the rear of the building. They also added a sprawling rectangular warehouse building to the south side of the roundhouse.

The warehouse closed in 2003 and was left abandoned three years later. Changed Lives Christian Center constructed their campus at the adjacent former Berman Brothers Scrap & Iron yard in 2009. The Mill Steel Company owns the former railroad shops west of the roundhouse. In 2017 the Alabama Trust for Historic Preservation and the Alabama Historical Commission added the roundhouse to their annual list of "Places in Peril."