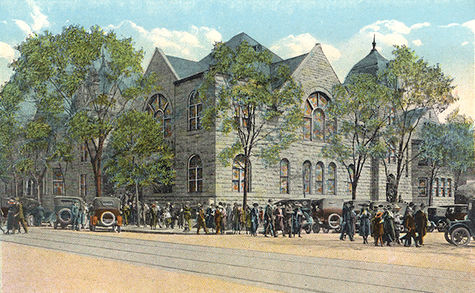 First Baptist Church of Birmingham is a Southern Baptist congregation located at 2209 Lakeshore Drive in Homewood.

Jonathan Hillyer arrived in Birmingham in the fall of 1871 as a missionary on behalf of the Home Mission Board of the Southern Baptist Convention. On June 9, 1872 he chaired a meeting in the Bryant Building with the aim of founding a new church in the city. The group met again on June 21 to organize the congregation and elected Hillyer as pastor. A month later the Elyton Land Company donated a lot on the northwest corner Block 50, at the corner of 6th Avenue North and 22nd Street for the erection of a church building adjacent to the Knesseth Israel Congregation.

A second church building was completed in February 1886 on the same site. During its construction the congregation, which had grown to 500, met at O'Brien's Opera House, and also established two missions, West End Baptist Church in the Spring of 1885 and Southside Baptist Church the following December.

In 1903, the church dedicated its third and longest-standing home at its downtown site. An education building was constructed nearby in 1926, providing space for church ministry as well as office space for other companies and the first Baptist Book Store. Throughout this time, many members of this congregation served in denominational life and in the community, including support for the Baptist Hospital.

The Civil Rights era greatly affected First Baptist Church. Throughout this time, the church became a growing commuter congregation as the neighborhood around the church changed. However, the church remained committed to ministering in their downtown location. In the wake of the 1954 "Brown v. Board of Education" Supreme Court ruling, the church resolved that no one would be "denied worship" due to race. During Grady Cothen's pastorate, that invitation was taken up, with some controversy.

Another group of African-American visitors came to test the church's welcome at Easter service, in the midst of the Alabama Christian Movement for Human Rights' 1963 Birmingham campaign. Then pastor Earl Stallings,one of the seven co-signers of "A Call For Unity" who were directly addressed in Martin Luther King Jr's "Letter from Birmingham Jail", welcomed the new worshipers to the church, but a large segment of the membership left in protest.

In 1968 incoming pastor Herbert Gilmore initiated new community outreach efforts, including a tutoring program at Powell Elementary School. A number of African-American children began participating in church programs, but none of their families were invited to join as members of the church. Many members opposed the outreach efforts and Gilmore narrowly survived efforts to remove him from the pulpit.

In 1970, Winifred Bryant and her daughter, Twila applied for membership, but were rejected by a vote of members. A resolution to consider membership without regard to race was defeated and a slate of anti-integrationist deacons was elected. Declaring "When I came, I said I would not be the pastor of a racist church and I won't," Gilmore joined a walkout of around 250 members on September 27. Around 350 members officially resigned on November 1 and founded the Baptist Church of the Covenant, where Bryant and her daughter were welcomed.

In 1984, AmSouth Bank approached the church about buying their downtown property for use as a parking lot. First Baptist voted to move from downtown to a new facility on the former location of the Samford University President's Home at 112 Shades Creek Parkway. During construction, the congregation met for worship at Shades Cahaba Elementary School on Sundays and had Wednesday services at the Kopper Kettle restaurant. The first service in the new building was held on Easter Sunday, March 30, 1986. In 1991, the congregation's growth led the church to enlarge the sanctuary and add an education wing.

AmSouth originally proposed demolishing the former church for parking, but were persuaded by John Harbert and Hall Thompson to agree preserve it as a meeting hall for civic clubs. After construction of the nearby Harbert Center in 1986 filled the need for a meeting hall, the bank proceeded to demolish the church building.