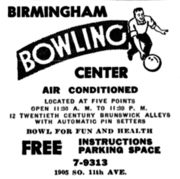 1945 ad for the Birmingham Bowling Center

It was developed in 1930 for the heirs of Robert Munger as part of their commercial redevelopment of Five Points South. Its Art Deco styling was detailed by architects Miller & Martin who had previously designed the Munger Building and Fred Jones Building to either side of the center.