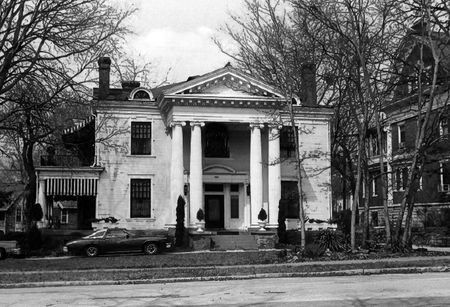 The Mortimer Jordan residence in 1976

The Mortimer Jordan residence, known as the Jordan Home, is a two-story Greek Revival mansion located at 2834 Highland Avenue, at 28th Place South. It was built between 1906 and 1906 for Mortimer Jordan III to share with his widowed mother, Florence Jordan.

The house was designed by architect William Weston. Construction began in 1906 and was completed in 1908. The front of the two-story wood-sided house features a double-height porch consisting of a heavily-detailed classical portico supported on two pairs of monumental Ionic-style columns. The recessed entryway, with beveled-glass sidelites and transoms, is crowned by a smaller segmental arch. The hipped roof was covered with terra-cotta tiles, punctuated by four chimneys as well as a skylight and numerous half-round dormers to light the attic, which was used as a children's play room.

The flat roof of a one-story veranda on the west of the house provides an open raised terrace above. Mr Jordan married Lelia Lucile Gaston, daughter of Zell and Lelia Gaston in 1909 and their son, Mortimer Jordan IV was born at the house in 1911. Mortimer III died in France in World War I. His mother remained in the house until her death in 1925.

The house was sold in 1928 to Annie Renfro Tomlinson Cabell, widow of John Tomlinson. Mortimer Jordan IV told Mrs Cabell's children that there was a ghost in the house that came down from the attic every night at midnight.

Annie Cabell's daughter, Joy Tomlinson Carter grew up in the house. Later it was divided into apartments, which she rented and managed in the early 1950s. The Frank George family lived in an upstairs unit from 1951 to 1952 and a downstairs unit from 1953 to 1954.

The house was purchased and restored by nightclub owner Al Pilkington in 1969. Over the next decades he restored the original rooms with new parquet flooring. He added a breakfast room off the kitchen and combined the parlor on the left of the entrance hall with a former ground floor bedroom to make a large living room, and enclosed the adjoining veranda to make a sunroom. Pilkington resided there until his death in January 2016. After Pilkington's death, the house was listed for sale for $995,000. It is currently owned by John-Bryan Hopkins.

The home was added to the Alabama Register of Landmarks and Heritage on July 21, 1977, and was listed as a contributing structure to the Highland Avenue Historic District which was placed on the National Register of Historic Places in November of that year. It is also a contributing structure in the Rhodes Park Historic District, registered in May 1982. The Alabama Historical Association placed a marker outside the house in 1997, honoring Mortimer Jordan Jr's medical legacy.