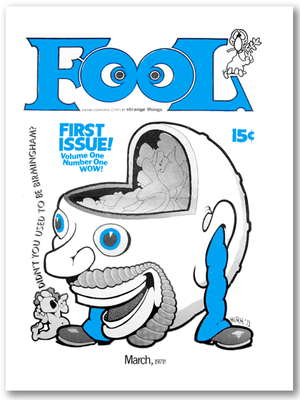 The Fool was an 8-page broadsheet newspaper published in Birmingham by the Strange Things Publishing Company for "the music and art people of the Southeast." and sold for 15 cents. The first and last issue was published in March 1971. The editor was Keith Harrelson.

The first issue included an unfavorable review of the film Love Story by Don Higdon, an account of a minor insurrection at Phillips High School, and a brief item about the then-new state law prohibiting possession of drug paraphernalia. Other articles promoted the Guitar Society of Birmingham, the inter-faith Youth for Hunger program, and Godspeed, a boutique and gallery with plans to become a community center in Homewood. The issue was illustrated with photographs of happenings at Avondale Park. The cover illustration and logo were drawn by Howard Cruse using the pseudonym "Kirk".