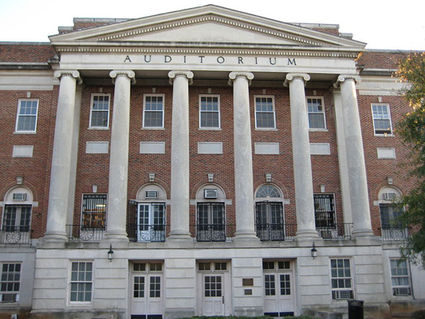 Richard Foster Auditorium (Building #7059) is a 5,400-seat multi-purpose auditorium building on the campus of the University of Alabama. Completed in 1939, the building has hosted graduations, concerts, lectures and registration, and was also the home court for the men's basketball team until 1968.

The building was funded in part by the New Deal Public Works Agency. It was designed by the Birmingham firm of Miller, Martin & Lewis Architects, which had been involved in most campus building projects since the early 1920s. The T-shaped concrete-framed structure faces north, with a projecting parapet supported on six Ionic columns. The base of the building is clad in limestone, with red brick above, with limestone quoins and trim. The entrance is flanked by stair towers. The sides of the building are divided into six bays each by brick pilasters, with tall window openings and small wrought-iron balconies. The south (rear) facade of the original structure is a solid brick wall with a stepped gable and narrow pilasters capped with limestone.

The interior lobby has a terrazzo floor, leading onto the Maple-floored arena, which measures 85 feet by 164 feet. The cloak rooms, trophy room, and mezzanine lounges in the original design were converted later into offices. The arena's concession stands have been used for storage, while the dressing rooms and showers remained in use. The ceiling is supported on steel trusses and originally featured a 41'x88' gabled skylight, later covered. An acoustical tile ceiling conceals the skylight from the interior.

After university president Richard Foster died in office in 1941, the auditorium was named for him.

On January 4, 1954, at the end of the first half of a basketball game against North Carolina, Tide center George "Bama" Linn sank an 84 foot-11 inch full-court shot. It was then the longest basket ever recorded in NCAA history. A brass marker was placed on the gymnasium floor to mark the spot. The Tide's mens' teams moved to the newly-built Memorial Coliseum in 1968, but Foster continued to serve as home court for women's basketball and volleyball until 1996.

Foster Auditorium as backdrop to Wallace's "stand in the schoolhouse door"

Because it was used for class enrollment, the entrance to Foster Auditorium was the site where Governor George Wallace staged his "stand in the schoolhouse door" on June 11, 1963. After he made a defiant speech, Wallace stepped aside for federalized Alabama National Guard troops, allowing Vivian Malone and James Hood to enter and complete their enrollment.

Five years later, Senator Robert F. Kennedy spoke to 4,000 students at Foster Auditorium on the need for national unity. Conductor Sixten Ehrling brought the Detroit Symphony Orchestra to perform at the auditorium on February 17, 1971. On March 26, 1976 boxer Edgar "Mad Dog" Ross successfully defended his Southern Junior Middleweight title in a bout against Juan Jose Herndandez. Beginning in 1984 the campus' Union Programs concert series was moved to Foster from Memorial Auditorium. R.E.M., the Go-Go's, and the Neville Brothers all played there that year.

Over the following years, the auditorium was allowed to fall into disrepair. The gymnasium was used sparingly by the university's Department of Kinesiology, which shared some offices in the building with the Department of Health Sciences. The building was declared a National Historic Landmark on April 5, 2005. In 2006 it was sealed off due to structural instability.

In 2009 the University announced a $15 million renovation of Foster Auditorium as an athletic facility. Davis Architects designed the renovations and additions, which included new construction on the formerly-blank south end. Outside the north entrance, a landscaped plaza, designed to accommodate game-time crowds, was dedicated as the Malone-Hood Plaza, with a 40-foot-tall "Autherine Lucy Clock Tower as its central feature.

Women's basketball and volleyball returned to their former home court on February 13, 2011.