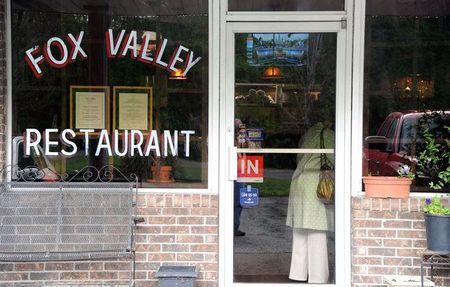 Fox Valley Restaurant was a white-tablecloth establishment founded in August 1990 by Anthony Mangold and Sue Lemieux. The couple started the restaurant as an outgrowth of Lemieux's dessert business, which operated out of a local meat-and-three just north of Maylene. When the restaurant was put up for sale, they purchased it and gradually phased out its regular specials to make way for more innovative dishes.

The result became a nine-time winner of the Wine Spectator Award of Excellence and earned an on-air plug from American Idol winner Taylor Hicks. The restaurant's most famous dish was the "steak and cake", pairing a grilled filet mignon with a crab cake, one of the specialties of the house. Although the menu and wine list were top tier, the restaurant prided itself in keeping a casual atmosphere.

Fox Valley occupied space in a small strip shopping center at 6745 Shelby County Highway 17, at the intersection of Highway 44, close to another intersection with Fox Valley Farms Road. The restaurant expanded from its original space into a former video store in 1992 and a former bar in 1999. A Shell station still shared the shopping center.