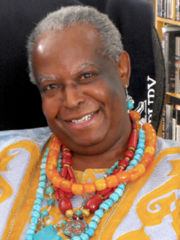 François Scarborough Clemmons (born April 23, 1945 in Birmingham) is an opera singer, playwright and lecturer best-known for his appearances as "Officer Clemmons" on "Mister Rogers' Neighborhood".

Clemmons was born in Birmingham, but his family moved to Youngstown, Ohio when he was a child. He learned to sing negro spirituals form his grandmother and performed at school and church functions, later fronting a rock band. He studied music at Oberlin College and earned a master of fine arts at Carnegie Mellon University. He auditioned successfully for the Metropolitan Opera in Pittsburgh, Pennsylvania and earned a position in the Opera Studio, performing with numerous companies across the country.

Clemmons joined the cast of "Mister Rogers Neighborhood", portraying a police officer and owner of a singing and dance studio. He also continued to perform professionally. His performance as Sportin' Life in the Cleveland Orchestra's recording of "Porgy & Bess" won a Grammy in 1973. In the 1980s he returned to singing spirituals and founded a professional performing company, the Harlem Spiritual Ensemble, which he dedicated to "preserving, sustaining and commissioning new and traditional arrangements of American Negro Spirituals for future generations." Many of Clemmons' real-life achievements were reflected on the program.

In his later career, Clemmons arranged a song-book entitled Song For Today, published by Strube Verlag of Munich, Germany and wrote and produced a musical based on the life of Roland Hayes in 1997.

Clemmons is currently a scholar and artist-in-residence at Middlebury College in Middlebury, Vermont.