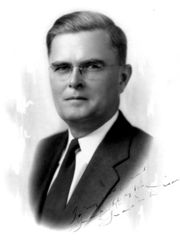 Dixon's father was a Baptist minister and lecturer and his uncle was Thomas Dixon, later author of The Clansman. Though born in California, Dixon grew up in Virginia and was educated there and in Washington D.C. He matriculated from the Phillips Exeter Preparatory School in New Hampshire and earned his bachelor's degree at Columbia University in New York, New York and a law degree from the University of Virginia in 1916.

After graduating, Dixon took a position with Frank White's law firm in Birmingham and married Greene County native Juliet Perry. He managed White's successful campaign for a U.S. Senate seat before resigning at the outbreak of World War I to volunteer for the Royal Canadian Air Corps.

During the war, Dixon was assigned to the French escadrilles as a 2nd Lieutenant, serving as an aerial observer and machine gunner. His plane was shot down over Soissons on July 21, 1918, resulting in the loss of his right leg. He was promoted to Major, awarded the Croix de Guerre with palm and made a chevalier of the French Foreign Legion. After his May 1919 discharge he returned to Alabama and helped organize the American Legion in Alabama. He served as its commander, as well as post commander for Birmingham.

Professionally, Dixon entered a partnership with Stephen Bowers, taking primarily corporate clients. He served as an assistant solicitor for Jefferson County until 1923 and authored a treatise entitled The Local Laws of Birmingham. During the 1920s he labored to shore up support for the national Democratic Party and helped win Alabama for presidential candidate Al Smith who challenged Herbert Hoover in the 1928 election on grounds that Republicans threatened white supremacy in the South. His ties to corporate interests kept him, however, from becoming involved in the populist Ku Klux Klan, which was dominated by the working classes.

Dixon ran for Governor in 1934, but lost to progressive Bibb Graves who was swept into a second term, despite powerful opposition from the "Big Mules". He easily defeated Chauncey Sparks to win the office in 1938, promising to end poll taxes and streamline the state government at a time when President Roosevelt's "New Deal" expansion of government was polarizing the public.

Dixon proved adept at the business of governing and sought broad-based support for his "Good Government" agenda before bringing it to the legislature, which was stocked with allies in key leadership positions. He had studied governmental reform efforts in Virginia and sought advice from University of Alabama professor Roscoe Martin . Focusing on eliminating waste and redundancy, he eliminated 27 state agencies through combination, such as folding the Department of Labor into the Department of Industrial Relations. He appointed his own department heads to take the place of independent commissions and fired hundreds of state employees, including all those hired between his nomination and inauguration. He successfully lobbied for a comprehensive state civil service system and a teacher's tenure law, as well as a retirement system.

Dixon also pushed for tax reforms, including a measure that made county property assessment boards more accountable, resulting in more reliable funding for public education. His alignment with corporate interests and opposition to organized labor cast him as an antagonist to federal New Deal legislation, while his ties to white supremacist politics, embodied by the "Christian Americans" organization, led him to denounce federal anti-lynching laws and to warn that if the political means up keeping black citizens under "control" were removed, that the Klan would "ride again".

The onset of World War II led to an expansion of industry in the Birmingham District, as well as increases in farm production, shipbuilding and port activity. The mass enlistment of soldiers opened up jobs for the formerly unemployed and expanded Alabama's middle class significantly. Dixon authorized the establishment of the Alabama State Guard to offset the activation of the Alabama National Guard and mobilized it to keep order during several labor disputes.

Dixon left office on the cusp of a booming post-war economy and parlayed his popularity into national politics. He was one of the founders of the States Rights Party that split from the National Democratic Party in advance of the 1948 election over issues relating to federal involvement in racial integration. He gave the keynote address at the 1948 States Rights Democratic Party convention at Birmingham's Municipal Auditorium during which Strom Thurmond was nominated to run against Democrat Harry Truman, Republican Thomas Dewey and Progressive Henry Wallace for President.

In the 1950s, Dixon returned to his law practice, now called Bowers, Dixon, Dunn and McDowell, and lobbied on behalf of his clients in the state legislature. He campaigned on behalf of preserving the state's "Right to Work" law, which had been challenged by organized labor and often found himself at odds with the more liberal Governor Jim Folsom, Sr.

Dixon died in 1965 and is buried at Oak Hill Cemetery.