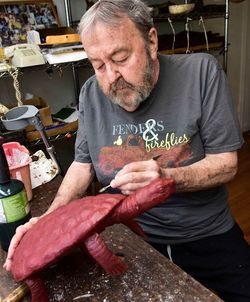 Franklin Fleming (born June 17, 1940 in Bear Creek, Marion County; died March 18, 2018 in Birmingham) was a sculptor, best known for his realistic depictions of animals and mythological creatures in fantastical settings. His work is in numerous public collections in the Birmingham area and farther afield.

Fleming grew up in rural Marion County. His speech developed slowly as he spent his early childhood immersed in fascination with the natural world. After high school he attended Florence State College (now the University of North Alabama) to study biology. He discovered painting through speech therapy classes. At the same time, the college maid taught him to sculpt from river clay.

After graduating, he worked as a technical illustrator for Hayes International in Birmingham and NASA in Huntsville. He later entered the fine arts program at the University of Alabama where he studied ceramics. He completed his Master of Fine Arts with multiple scholarships and fellowships. After a road trip to San Francisco, where he was influenced by the works of Robert Arneson, Peter Volkus and Marilyn Levine, he moved to Homewood and found success creating his signature fanciful animal sculptures for a range of clients.

A 1974 exhibition at the Birmingham Museum of Art led to the purchase of one of his pieces by Arnold Glimcher, director of New York's Pace Gallery that proved to be his big break. He returned to Tuscaloosa as an artist in residence during 1975 and had a solo exhibition at the Morgan Art Gallery in Kansas City in 1979. He went on to be shown in New York and Washington D.C. and earned numerous commissions for public projects, including perhaps his most notable work, the Storyteller fountain at Five Points South.

That project, initially conceived as a tiled wall in memory of art dealer Malcolm McRae, was expanded in scope by the influence of Cecil Roberts and Anne Adams to become a major public fountain.

Fleming's work is owned by the Birmingham Museum of Art as well as the Hunter Museum in Chattanooga Tennessee, the Smithsonian in Washington DC, and the Wiesman Museum in Malibu, California. Fleming's sculptures are also owned by numerous institutional and corporate collections, including the Birmingham-Shuttlesworth International Airport.

In 2001, Fleming suffered a heart attack. In 2007 he relocated from Homewood to Huntsville to live near his brother. In August 2008 he was arrested by Huntsville police for sexual misconduct following an undercover sting operation at a state-owned scenic overlook on Governor's Drive.

Another solo exhibition at the Birmingham Museum of Art in 2015 returned Fleming to public acclaim, but a spider bite put him in the hospital for a long battle with sepsis.