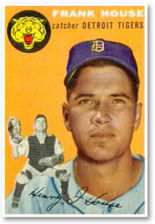 A native of Bessemer, House signed out of high school with the Tigers in 1948 for one of the biggest bonuses of the time – $75,000 and two automobiles, according to news reports. House made his debut in 1950 at 20 years of age. He earned his nickname as a baby, when his family used to say he was "big as a house" and he twisted "big" into "pig".

Strong defensive ability can often earn a catcher a job in the major leagues regardless of hitting ability, and House fit that mold as a solid receiver with a fast release and a strong arm. He also called a good game and was great at blocking the plate. His most productive season came in 1955 when he hit .259 with 15 home runs and 53 RBI in 102 games.

On April 21, 1958, House scored two runs as a pinch-hitter in one inning against the Cleveland Indians. Only five other pinch hitters have scored twice in an inning.

House died in Birmingham at age 75. He is buried in Bessemer's Cedar Hill Cemetery.