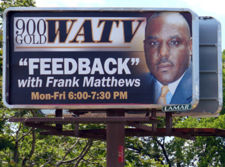 Matthews became involved in drugs and criminal activities as a youth in Cleveland and was arrested more than thirty times. While in prison, he prayed for lightning to strike a guard standing watch over the prison yard. Shortly afterward, lightning did strike, killing a fellow inmate who had destroyed a Bible. The experience spoke directly to Matthews, and he became a minister. After his release, he became involved in "Teen Challenge", a Christian-based recovery program. He renounced the gang lifestyle and completed an associates degree in religion at the Cerullo School of Ministry in San Diego, California.

Matthews married a woman from Birmingham and moved here around 1990. In response to a spate of homicides at Metropolitan Gardens, he began ministering directly to gang leaders at the housing project. He founded Intercession Ministries, Inc., an anti-gang ministry and accepted the call to lead Hallelujah Center, a Church of God in Christ congregation.

In 1992 Matthews was appointed by Mayor Richard Arrington to serve as a gang liaison to the city. Though he lost that position in 1995, he continued to advise the city on gang matters through 2001. As a minister, Matthews became known as God's Gangster, creating and producing a series of videotaped interviews with celebrities called "In Your Face" in order to deliver an anti-gang message to school students.

In 1999 Matthews founded the Outcast Voters League to engage in political activism and education. The League's first cause was to support development of the Barber Motorsports Park which was being opposed by the Cahaba River Society.

Matthews has run unsuccessfully for Alabama State Legislature, District 58, for Birmingham City Council District 2, and for Mayor of Birmingham in the 2003 election, in which he finished 9th of 18 candidates with 178 of 44,806 votes cast.

Matthews has attended most City Council meetings and numerous other events over the years and frequently speaks up as a community activist. In April 2007 he introduced a resolution calling for the city of Birmingham to formally apologize for slavery (a practice banished several years before the city was founded, but from which many leading citizens had previously benefited while others had suffered).

In the 2007 Birmingham mayoral election Matthews served on Larry Langford's campaign. He frequently criticized Langford's most notable opponent, Patrick Cooper on his "In Your Ear" radio show, which aired in the evenings on WAPI-AM. During his broadcasts he made use of racially-derogatory language to cast aspersions on Cooper. The name-calling was parodied by Birmingham News cartoonist Scott Stantis who was pilloried for using the same language in print.

It was initially reported at the time of Langford's inauguration that Matthews would succeed Don Lupo as the head of the Mayor's Office of Citizens Assistance. Reference to the new position was made on Matthew's radio show. However, Langford's chief of staff Deborah Vance said those reports were false. Instead he resigned from his radio show and was appointed Lupo's co-director. He helped organize Plan 10/30, a series of anti-crime rallies for African American residents at Fair Park Arena.

On March 31, 2008 Matthews returned to the air with an evening talk-show entitled "Feedback" on WATV-AM. In October he returned to WAGG-AM, where he began his radio career, and resurrected the title "In Your Ear" for the nightly program. In August 2009 he moved to mornings on WENN AM 1320, promising to "tell [Langford's] side and debate the issues."1.

During Langford's trial on federal corruption charges, Matthews headed a campaign to show public support and sold keychains emblazoned with the Mayor's top hat logo. Following Langford's conviction, Matthews kept his position until he was observed engaging in a vulgar tirade against Patrick Cooper supporters at city-wide Christmas party. He was fired by acting Mayor Roderick Royal whom Matthews later called a "Napoleon" on his radio program.

Matthews' Outcast Voters League has become active in public demonstrations and has purchased media advertisements to represent its political agenda. The group has called for the resignation of Senator Scott Beason over his use of the term "aborigines" in discussing voters in Greene County and held a vigil in memory of murdered Sanford, Florida teenager Trayvon Martin. The City of Birmingham posthumously made Martin an "honorary citizen" after that vigil.

Matthews campaigned again for Mayor in the 2017 Birmingham municipal election. His campaign slogan, "It's time to share the economic wealth of Birmingham," reflects his focus on reducing poverty, in part by establishing a fund to provide public support to small businesses and in part by reducing waste in the Mayor's office. He also pledged to reformulate the Birmingham Board of Education as a five member at-large body to reduce political conflicts.