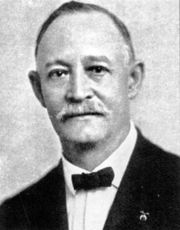 Grambs came to Birmingham from Scranton, Pennsylvania in 1883. He taught piano at the Starr Piano Company and served as organist and choir director at the Episcopal Church of the Advent. He commissioned the church's 2-manual and pedals pipe organ from Messrs. Pilcher of Louisville, Kentucky.

Within the year Grambs and Ben Theiss leased O'Brien's Opera House where he served as leader of the 8-man orchestra. He also headed Grambs Military Band which performed often at Sublett Hall. The group performed for a crowd of 2,000 at Capitol Park on July 6, 1895. He later conducted the pit orchestra at the Jefferson Theater.

Grambs' residence at 815 30th Street South in Lakeview was damaged in the 1901 Birmingham tornado. He retired from teaching in 1932 and died in 1940. He and his wife, Fannie had two children, Cecil and Gladys.

Scrapbooks pertaining to his life and career are housed at the Birmingham Public Library Archives.