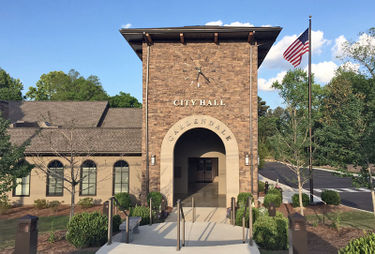 Gardendale City Hall is the seat of government for the City of Gardendale (incorporated in 1955). The original, one-story, flat-roofed brick building was located at 970 Main Street at the corner of Fieldstown Road. It housed the Gardendale Police Department and municipal jail as well as offices of the Mayor of Gardendale, chambers of the Gardendale City Council, and space for other city departments.

Twice since 2004 a developer representing CVS Pharmacy has made offers on the outdated building. After considering several sites, including one behind the Gardendale Fire Station near U. S. Highway 31 at Pinnacle Drive, the city made plans to construct a new municipal building in the former Caufield Square development near I-65.

They sold the existing City Hall in 2012 and moved into temporary offices in the former Gardendale Civic Center building at 960 Main Street, owned by Gardendale First Baptist Church. The Gardendale Police Department moved at the same time into a new permanent headquarters in the former Food World location at 1309 Decatur Highway. On May 19, 2014 a contract for $3,179,000 was awarded to Blalock Building Company to construct the building. Ground was broken for the new City Hall on June 18, 2014.

The new Gardendale City Hall is located at 925 Main Street and opened to the public on September 21, 2015.