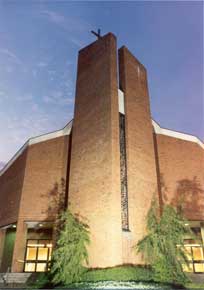 Garywood Assembly of God is a large Pentecostal church at 2730 Allison-Bonnett Memorial Drive in Hueytown. It was founded as El Bethel Assembly of God in 1947 during a tent crusade by evangelist Dorine Justice, who stayed on as pastor for the first year. The current pastor is John Loper, who has led the church since 1979.

Between 1950 and 1979 there were eleven different pastors, during which time church growth was slow. Attendance increased from around 250 to nearly 1,500 during the 1970s and 80s, with numerous outreach efforts. The church's annual Easter Drama debuted in 1977 and has remained an annual tradition. The Garywood Camp Meeting has brought well-known spiritual leaders to the area. And the radio outreach program "Garywood Alive" has since grown into a weekly television program.

In 2003 Garywood's congregation overwhelmingly voted to buy property on I-459 near McCalla for relocation. Original plans for the site included a 2,500-seat state-of-the-art auditorium, large facilities for youth, children's ministry and greatly expanded capacity for Garywood Christian School. However, the church sold the property to Colonial Properties Trust in 2006 for the Promenade Tannehill shopping center. The church currently plans to use the proceeds of the sale to build a new facility approximately one mile away from the first site, near the interchange of I-459 and I-20/59.