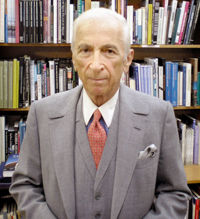 Gay Talese (born February 7, 1932 in Ocean City, New Jersey) is an American author who wrote for The New York Times in the early 1960s and helped to define literary journalism or "new nonfiction reportage", also known as "New Journalism". His most famous articles are about Joe DiMaggio, Dean Martin and Frank Sinatra.

Talese was born into a Roman Catholic Italian-American family just south of Atlantic City. His southern Italian father, Joseph Talese, was a tailor who had emigrated to the United States in 1922 and his mother, the former Catherine DePaolo, was a buyer for a Brooklyn department store.

At school as a child, he wore hand crafted suits from his father's shop which, he later reflected in his memoir Origins of a Nonfiction Writer (1996), caused him to appear to be older than his classmates. He recounted his early years in his book "Unto the Sons".

Talese attended Ocean City High School. His entry into professional writing was an unintended consequence of his attempt to gain more playing time on the baseball team by relieving his coach of the responsibility of forwarding game reports to the weekly Ocean City Sentinel-Ledger. Impressed by his accounts, the paper gave him a regular column. He graduated in 1949.

Perhaps reflecting the still pervasive bigotry at many universities of the era, Talese was rejected by dozens of colleges in New Jersey and nearby states. He eventually was accepted at the University of Alabama, where his selection of a major was, as he described it, a moot choice. "I chose journalism as my college major because that is what I knew," he recalls, "but I really became a student of history."

It was here that he would begin to employ literary devices more well known in fiction, like establishing the "scene" with minute details and beginning articles in medias res ("in the midst of things"). In his junior year, he became the sports editor for the campus newspaper, Crimson-White, and started a column he dubbed "Sports Gay-zing."

After graduating in June 1953, Talese moved to New York City, where he found work as a copyboy at the New York Times. He eventually was able to get an unsigned article published in the Times. In "Times Square Anniversary" (November 2, 1953), he interviewed the man who was responsible for running the headlines that flash across the famous marquee above Times Square:

He followed this with an article in the February 21, 1954 edition concerning the chairs used on the boardwalk of Atlantic City. Soon afterward he was drafted into the Army. A graduate of the Reserve Officers' Training Corps program at Alabama, he was commissioned as a second lieutenant and sent to Fort Knox, Kentucky, to train in the Tank Corps. Before long he was transferred to the Office of Public Information where he found himself once again working writing a regular column, "Fort Knox Confidential" for the corps' paper, Inside the Turret.

When Talese completed his military obligation in 1956 he returned to the New York Times as a full-fledged sports reporter. Of the various competitions, boxing held the most appeal for Talese. He wrote 38 articles about Floyd Patterson alone.

He was promoted to the Albany Bureau to cover state politics, but it was a short-lived assignment as Talese's exacting habits and meticulous style irritated his new editors to the point that they recalled him to the city, assigning him to write obituaries. He recalled, "I was banished to the obituary desk as punishment--to break me. There were major obituaries and minor obituaries. I was sent to write minor obituaries not even seven paragraphs long."

After a year in the obituary section, Talese began to write articles for the Sunday Times which was run as a separate organization from the daily Times by editor Lester Markel. His first published book was The Bridge (1964), a reporter-style, non-fiction depiction of the construction of the Verrazano-Narrows Bridge in New York City. Talese's 1966 Esquire article "Frank Sinatra Has a Cold," is one of the most influential American magazine articles of all time, and a pioneering example of New Journalism. With what some have called a brilliant structure and pacing, the article focused not just on Sinatra himself, but also on Talese's pursuit of his subject.

Talese's celebrated Esquire piece about Joe DiMaggio, The Silent Season of a Hero,—in part a meditation on the transient nature of fame—also appeared in 1966. When a number of Esquire pieces were collected into a book called Fame and Obscurity Talese paid tribute in its introduction to two writers he admired by citing "an aspiration on my part to somehow bring to reportage the tone that Irwin Shaw and John O'Hara had brought to the short story." His non-fiction book Honor Thy Father (1971), about the travails of the Bonanno crime family in the 1960s, was made into a feature film.

Talese is married to Nan Talese, a New York editor who runs the Nan A. Talese/Doubleday imprint. Gay and Nan Talese's marriage will be the subject of Talese's next book, the third in a series published by Knopf which includes Unto the Sons and A Writer's Life.