Birmingham's Gay pride parade has been held in Five Points South annually since 1989, recently as part of 10 Days of Pride, sponsored by Central Alabama Pride.

Earlier pride events have been celebrated in Birmingham, including the "day in the park" events which were inaugurated on June 24, 1979 and later taken over by Central Alabama Pride as Pridefest.

The parade is intended as a "family" event and displays which are considered inappropriate are prohibited. 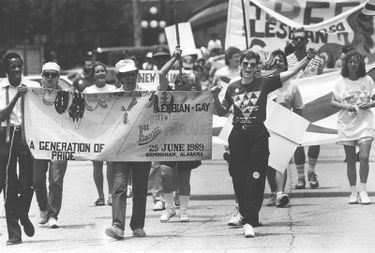 The 1989 parade was held on Sunday afternoon, June 25, in Southside. The event marked the 20th anniversary of the Stonewall riots in New York City.

The 20th annual Pride began at 8:30 PM. The route followed 20th Street South from Highland Avenue to 7th Avenue South, then proceeded informally to the Lakeview Yacht Club for an after party.

The event made headlines when Mayor Larry Langford publicly expressed his disapproval for "the gay lifestyle" and promised not to sign the resolution endorsing the parade. It was initially reported that he planned to deny a permit for the parade to take place. Later he clarified that he would not interfere in the permit process which is handled through the Birmingham Traffic Engineering Department and Birmingham Police Department, but that he would not allow banners for the event on city-owned lightposts. After a meeting with organizers, the banners were allowed.

Organizers estimated that over 1000 people participated, hundreds more than in previous years. Some said that Langford's public stance prompted their participation as a show of support.

The 2012 Pride parade was held on June 9, with celebrants eclipsing the protesters along the route. The J. Clyde fire truck and the Tragic City Rollers roller derby team participated in the event.

Libertee Belle, who appeared in every parade since 1989, usually bringing up the rear, served as grand marshal for the 25th anniversary event.

The 2019 parade processed down 7th Avenue South from 32nd Street to Our Place. The parade lasted for a full hour with 80 groups, businesses and organizations participating. Major sponsors included BBVA and Alabama Power.