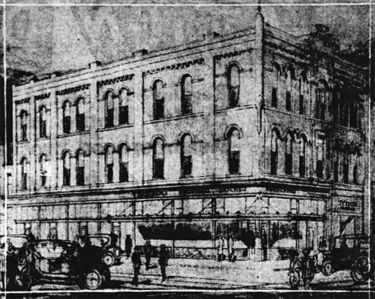 Harry Wheelock's rendering for the 1926 remodeling of the Gelders Building

The Gelders Building, also called the Phoenix Club Building is a three-story, 50-foot by 100-foot brick commercial building on the northwest corner of Block 74, southeast of the intersection of 20th Street and 4th Avenue North. The building was built between 1888 and 1891, and was owned in the 1920s by "pioneer citizen" Louis Gelders.

In 1926, with security from Brackin's jewelry store's 30-year lease, Gelders commissioned a $35,000 renovation of the building to designs by Harry Wheelock. Large openings were cut into the walls of the lower two floors, with steel girders spanning them. An elevator was installed at the rear of the building and the stairway removed to create a storage space. Nelson Brackin coordinated the remodeling of his store with that work, adding an electrified marquee around the corner of the building with 600 light bulbs spelling out his slogan, "Meet Brackin and Wear Diamonds".