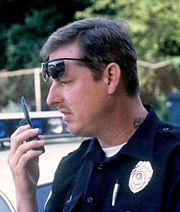 Stone, the son of Ronald and Rita stone of Helena, was a veteran of the Air Force and spent ten years on the Birmingham police force before joining the force in Vestavia in 2002. A resident of Helena, Stone and his wife Amy had five children between them.

Stone was on his way to work when he was involved in a fatal motorcycle accident on I-65 North near the Valleydale Road exit in Hoover. He struck a deer and was subsequently struck by two oncoming vehicles. He is interred at Southern Heritage Cemetery in Pelham.