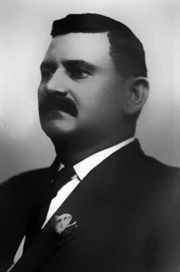 Bodeker's was the son of George and Johanna Bart Bodeker of Virginia. His father, a German immigrant, was a veteran of the Mexican-American War where he befriended Jefferson Davis. During the Civil War, Davis appointed him a "Detective of the Confederate States" involved in espionage behind enemy lines.

Bodeker moved to Birmingham in 1886 and took a job as a streetcar driver on the East Lake dummy line. He joined the Birmingham Police Department on September 5, 1889 and served for twelve years as a patrolman before quickly mounting the ranks. He spent a year as sergeant, then served as warden of the Birmingham City Jail before being promoted to detective under Chief Thomas McDonald. He was instrumental in bringing about the arrests of members of the Miller-Duncan gang.

Bodeker ran for chief in the 1907 election, narrowly losing to William Wier who claimed that liquor and sporting interests were aligned against him in the race. After Wier's retirement, Bodeker was appointed to the office in December of the same year.

Faced with a fast-growing increase in reports of theft from porches and gardens in July 1908, Bodeker concluded that Black people were to blame and issued an order saying:

"There are too many negroes loafing around pool rooms and prowling the streets at night. If you will pick up these rounders for vagrancy there will be less petty stealing."

In addition to investigating crimes against persons and property, Bodeker was charged with enforcing the city's blue laws, codifying public morals. He found fault with a stage performance at the Gayety Theatre in January 1909 and issued a formal warning:

"I like to see a good show and enjoy it, but at the same time I will not tolerate any such movements as I saw this afternoon and I assure you that if this occurs tonight, I will most assuredly put the entire troupe under bond."

"...it would be impossible for me to give you the exact figures of crimes committed by the colored people, however, I wish to say that the Prohibition Law as I see it has not benefited the white people or the negroes, as Prohibition is a farce wherever it has been tried. I do not see any difference relative to crimes committed by either race. Respectfully, Geo. H. Bodeker, Chief of Police."

His correspondence seems somewhat at odds with his public support for Mayor A. O. Lane's calls for regulation of saloons and his statement that "the negro vagrants cause more trouble in a city than all other criminal classes combined".

In 1911 Bodeker submitted a proposed bill to the Alabama Legislature that would remove the office of police chief from political vagaries by making it a permanent position, subject only to a court finding of bad behavior or inefficiency. As Chief, Bodeker gave rising judicial star Hugo Black a gold watch on his October 22, 1912 retirement from the Birmingham Police Court.

In 1914, Bodeker ran for the office of Jefferson County Sheriff. He was removed from the Birmingham Police Department at the start of the campaign by Commissioner and former candidate for Sheriff, George Ward amidst charges that he had accepted bribes from bordellos and gambling houses.

Instead he founded Bodeker's National Detective Agency on January 15, 1914 with offices on the second floor of the Brown-Marx Building. The agency grew to become the third-largest in the United States with branches in Charlotte, North Carolina; Chattanooga, Tennessee; Jacksonville, Florida; Montgomery and Mobile.