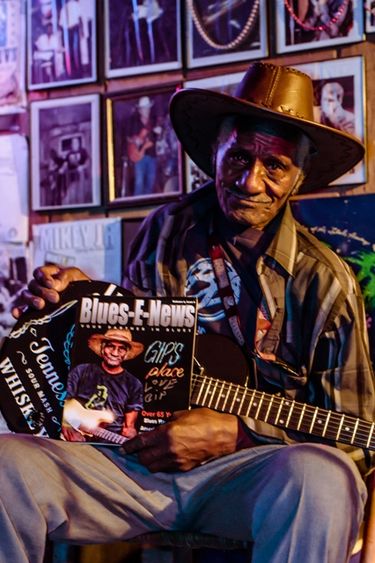 Gip's Place is a blues joint located in the back yard of Gip Gipson's home on Avenue C on Paul's Hill in Bessemer.

An avid blues fan and part-time musician, in 1952 Gipson began hosting barbecues in his back yard for musicians to entertain friends and neighbors. The weekend events grew in popularity and he gradually added a small enclosure with a stage. Lenny Madden built the garage that later housed Gip's Place. Gipson and Jeff Dunaway kept up with maintenance and repairs on the juke joint.

Gip's Place became, over the years, a must-stop venue for blues musicians across the Southeast. They cited the "authentic Delta" feel of the little shack that could hold 50 people shoulder-to-shoulder. On summer nights the side-tarps were removed to allow more people to hear the music while gathered in Gipson's back yard.

An early-morning fire on July 16, 2011 caused damage to a storage building between Gipson's home and the performing area, destroying several guitars, including one that was a gift from Chuck Berry.

On May 4, 2013, Bessemer Police temporarily shut down the venue for operating illegally. An agreement with the City of Bessemer was reached allowing Gip's place to remain open.

Gipson worked with manager Diane Guyton to keep the venue running. After he was hospitalized in June 2019 she continued to operate Gip's Place, but a dispute arose between her and Gipson's family. Guyton announced that the Alabama Department of Human Resources had issued a protective order preventing Gipson from appearing at the venue, and that a final concert would be held on August 10. Gipson's son Keith Gipson followed up with a social media post saying that Gip's Place would continue operating, but under different management.