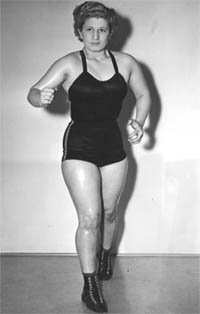 Gladys was the daughter of Fred and Clara Gillem. She grew up in Lakeview as a tomboy fishing with her dad and his friends. She had trouble staying in school, having been expelled from Blessed Sacrament School for putting minnows in the holy water and from her high school for giving out her home-made wine.

She was a talented softball player, on a state championship team in the late 1940s when her father died, leaving her to care for her crippled mother. She nursed her mother at home and learned to cook, winning several Alabama State Fair ribbons for her preserves, cakes and cookies.

Fascinated by a wrestling exhibition featuring Mildred Burke that she saw in Fairfield in 1942, Gillem decided to leave Birmingham and take up wrestling. She talked her way into the stable of Burke's husband and promoter Billy Wolfe. She trained with Wilma Gordon and learned quickly to hold her own in the ring. For the next decade she and Burke wrestled as a paired attraction, with Burke always taking the victories. She helped expand Burke's popularity and helped define the "jobber" role of a popular daredevil opponent for the top wrestler. She later bragged about spending 19 years in wrestling without a victory.

Unhappy with her cut of the take, Gillem eventually quit Wolfe's touring act and returned to Birmingham. She spent a while as a show-rider at a local horse track, but was handicapped by her height. She then worked briefly as a trapeze artist until she had the opportunity to assist lion tamer Ernest Enger. She suffered through an apprenticeship before taking part-ownership of the act, and then taking over as owner, working freelance for circuses, carnivals and special events.

She married John Aloysious Wall of the Bailey Circus and had three children. They settled in Jacksonville, Florida after a disastrous circus tour of Central America. Gillem parlayed her lion-taming skills into a career as an alligator wrestler at Casper's Alligator Farm. She was widowed when Wall was killed by a falling crate while working as a Broadway stagehand. She packed up the kids and mounted a touring version of the alligator show until her back gave out. She then returned to Birmingham to run her mother's boarding house.

In 1973 Gillem bought an old 10-room Pensacola motel and renamed it the "Birmingham Motel" with a "lovers welcome" sign out front and a two-hour special for $10. After emergency bypass surgery at UAB in 2003 her health declined and she was diagnosed with Alzheimer's disease. Her daughters helped care for her until her death in August 2009.

Gillem was featured in the 2004 documentary Lipstick & Dynamite, Piss & Vinegar: The First Ladies of Wrestling directed by Ruth Leitman, in which she frankly describes her experiences in and out of the ring. Her grandson Shawn "Beaver" McCoy named his rock band "Killem Gillem" in her honor.