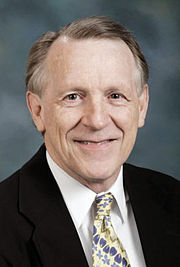 John Glen Browder (born January 15, 1943 in Sumter, South Carolina) is a former representative of Alabama's 3rd Congressional District of Alabama, serving in the United States House of Representatives from 1989 to 1997, where he was a founding member of the "Blue Dog Coalition" of moderate Democrats. He was also a state representative, vice chair of Governor George Wallace's Education Reform Commission, Alabama Secretary of State, and chair of the Alabama Elections Reform Commission.

Browder, the son of Archie Calvin and Ila Frierson Browder of South Carolina, graduated in 1961 from Edmunds High School in Sumter. He attended Presbyterian College in Clinton, South Carolina, having received a Bachelor of Arts in history in 1965. He married the former Rebecca Moore in 1967 and went on to obtain a Master of Arts and Ph.D. in political science from Emory University in Atlanta, Georgia, in 1971.

Before earning his graduate degrees, Browder served a brief stint in 1966 as a sportswriter for the Atlanta Journal. He worked from 1966 to 1968 as an investigator with the United States Civil Service Commission. After his time at Emory, he became a professor of political science at Jacksonville State University in Calhoun County. He served on the faculty from 1971 to 1987. From 1978 to 1987, he was also president of Data Associates in Anniston, primarily conducting polls and managing campaigns for candidates for public office.

Browder's political career began in the Alabama statehouse, where he served in the Alabama House of Representatives from 1983 to 1986. He served on the House Judiciary Committee and the Constitution and Elections Committee. At the end of his first year, Governor George Wallace appointed him to the Ways and Means Committee. Browder and Wallace worked closely on improving education in Alabama. Following passage of Browder's Education Reform Act in 1984, which provided for the formation of the Governor's Education Reform Commission, Wallace appointed Browder vice chairman of the commission to formulate and implement a series of measures to bring the quality of education in the state up to national standards.

Browder's major accomplishments in the legislature were passing the Browder Education Reform Act of 1984, the Alabama Crime Victims Compensation Act of 1985, and the Alabama Performance-Based Career Incentive Program (Teacher Career Ladder) Act of 1985. His colleagues included him among their Outstanding Legislator ranks in 1985 and 1986; and he received special commendations from crime victims, social workers, and school financial aid administrators.

After one term in the state legislature, Browder was elected to the office of Alabama Secretary of State, serving from 1987 to 1989.

During Browder's tenure, the Secretary of State's office digitized the state’s record-keeping system, established a training system for poll workers, monitored the handling of absentee ballots, purged voter rolls of ineligible — mainly deceased — voters, and registered hundreds of new voters through public outreach. Browder established and chaired the statewide Alabama Elections Reform Commission to recommend and popularize changes to outdated laws governing the state's elections. His main accomplishment as Secretary of State was passage of his Fair Campaign Practices Act of 1988, which replaced the Corrupt Practices Act of 1915 and remains the basis of campaign finance reporting law in the state.

He was elected as a Democrat to the 101st United States Congress, by special election, to fill the vacancy caused by the death of Representative Bill Nichols, and re-elected to the three succeeding Congresses.

In the House, Browder served on the House Armed Services Committee and the House Budget Committee. He focused on military readiness and balancing the federal budget. He successfully defended Fort McClellan, an Army training base in his district, from three efforts to close it in the early 1990s. (The Army eventually won authorization to close the base in 1995.) In 1992-93, he chaired a two-year special House inquiry, Countering the Chemical and Biological Threat in the Post-Soviet World. He advocated for benefits for veterans returning from Operation Desert Storm and study of a set of symptoms that would come to be known as Gulf War Syndrome.

Browder, a moderate Democrat, was a founding member of the Blue Dog Coalition in late 1994. As chairman of the Blue Dogs' Budget Committee and a member of the House Budget Committee, Browder introduced ideas that would eventually form the basis of bipartisan agreement in the contentious 1996 federal budget. Browder authored the Blue Dogs' budget proposals to use savings from spending cuts to pay down the federal deficit and make tax cuts dependent on meeting deficit-reduction goals.

He did not seek re-election to the House of Representatives in 1996, and his seat went to Republican Bob Riley. Browder was instead an unsuccessful candidate for the United States Senate.

Following his time in the House of Representatives, Browder accepted two academic positions, the first as a Distinguished Visiting Professor in the Department of National Security Affairs at the Naval Postgraduate School (1997–present), with primary responsibility in the area of "Congress and the Pentagon". He later returned to Jacksonville State University in Alabama as Eminent Scholar in American Democracy. He retired from JSU in 2005 as Emeritus Professor of American Democracy.

Browder has published three books, The Future of American Democracy: A Former Congressman's Unconventional Analysis (2002), The South's New Racial Politics: Inside the Race Game of Southern History (2009), and Stealth Reconstruction: An Untold Story of Racial Politics in Recent Southern History with Artemisia Stanberry (2010). He is a regular contributor to The Huffington Post online news journal.