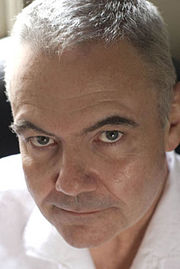 William Glenn Shadix Scott (born April 15, 1952 in Bessemer; died September 7, 2010 in Birmingham) was an actor best known for his roles as "Otho" in Tim Burton's Beetlejuice and "the Mayor" in The Nightmare Before Christmas. His Southern baritone also contributes to his fame.

Shadix was the son of Ruth Livingston Shadix, who divorced his father and married Chester Scott Jr when Glenn was two years old. The family moved frequently in Alabama and around the Gulf Coast as Scott managed various Goodyear Tire centers, but settled in Jasper before Glenn began high school.

Shadix had become fascinated with the power of film and television from childhood when the family would gather rapt for nightly television programs. He gravitated to theater and appeared in every production of Walker High School's drama club while he was a student.

Shadix informed his parents that he was homosexual in 1969, and, under the threat of being exiled from his immediate family, enrolled in an experimental "aversion therapy" program administered by a Dr Hainey at the UAB Medical Center. To "cure" him of his homosexual desires, painful electroshocks were delivered to Shadix while he viewed male pornography.

During the same summer, he worked re-capping tires at his step-fathers shop and went on a series of unpromising dates with women. The combined ordeal led him to attempt suicide by an overdose of the tricyclic antidepressant Elavil, after which he was confined to the hospital's psychiatric ward for three weeks. During that time his stepfather took him out for a daytime trip to see the Alabama-LSU game at Legion Field, and the two reconciled. His mother also came to terms with her son's sexuality and grew to accept him.

Shadix attended classes at Walker College (now the Jasper campus of Bevill State Community College) and at Florence State University (now the University of North Alabama). He made his professional debut alongside noted actress Peggy Cass in a summer production of "Goodbye, My Fancy" at Florence State in 1972.

In 1973, after months of active work in the Birmingham theater scene he moved to Atlanta and earned his Equity card playing Sancho Panza in a production of Man of La Mancha at the Alliance Theater. He then attended Birmingham-Southern College on scholarship for two years, studying with Lynda Linford and avant garde playwright-director Arnold Powell. When Stay Hungry came to town in 1975 he worked as an extra in scenes at the Country Club of Birmingham.

Shadix lived in New York City prior to moving to Hollywood in the late 1970s. While there he befriended playwright Tennessee Williams while working as a production assistant for Vieux Carré at the St James Theater. Once in Los Angeles, he joined The Groundlings, an improv troupe, and later joined the Ensemble Studio Theater, where he starred in a 1986 production of "Faustus Light the Lights", winning an award from L. A. Weekly for his portrayal of Gertrude Stein. 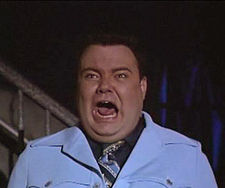 Shadix's film debut was a bit part in the 1981 remake of The Postman Always Rings Twice. His success with the Ensemble Studio Theater brought him to the attention of director Tim Burton, who cast him in the major role of Otho. After that, he and Burton became good friends and Shadix was frequently cast in Burton's projects. He was offered his role in The Nightmare Before Christmas while swimming in Burton's backyard pool. He found steady work as a voice artist for various animated series and continued to work as a character actor in smaller films. His first starring role was as "Peter" in 2002's Shut Yer Dirty Little Mouth, an independent film version of the play "Shut Up, Little Man!", which was inspired by audio-verite recordings made of arguments between San Francisco roommates Peter Haskett and Raymond Huffman in the late 1980s.

Shadix underwent gastric bypass surgery in April 2000 and lost more than 100 pounds. In the mid-2000s he retired from acting and moved to the G. H. Stevenson residence in Bessemer to be closer to family. While in the area he participated in local theater programs and was active with Birmingham AIDS Outreach. After the house burned to the ground in 2008 he bought a condominium at Highland Plaza on Highland Avenue and also began working with the United Service Organizations (USO) and the Wounded Warrior Project, visiting military hospitals. In September 2010 he fell in the kitchen of his condo and suffered a fatal head injury. His memorial service was held at Covenant Community Church.