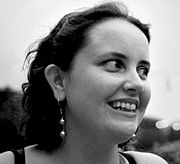 Glenera "Glenny" Brock (born December 31, 1976 in Birmingham) is a writer and former editor for WELD and Birmingham Weekly.

Brock is a 1995 graduate of John Carroll Catholic High School and completed her undergraduate degree at Birmingham-Southern College in 1999. While there she worked for editor Kyle Whitmire on the campus paper, the Hilltop News. After graduating she freelanced, contributing to the Birmingham Weekly among other outlets. In December 2000 she joined the staff full time and was promoted to editor in August 2002. Brock completed a master of fine arts in creative writing from Louisville, Kentucky's Spalding University in 2007.

As editor, Brock recruited Whitmire to work for her, resulting in "War on Dumb", an award-winning political column that became a hallmark of the alternative weekly. She and publisher Chuck Leishman "mutually agreed" to end her tenure with the paper in March 2010. The "WELD" publication, launched in 2011, features Whitmire's The Second Front, a continuation of his "War on Dumb'. Brock resigned from WELD In May 2012.

Brock has also worked as a copy editor at Luckie & Company and founded the Friends of the Lyric Theatre. She is currently on staff with the theater's owner Birmingham Landmarks as a volunteer coordinator.