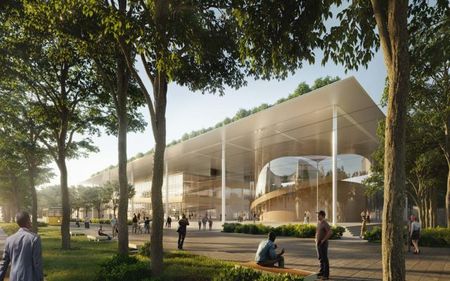 Rendering of the proposed Global Forum for Freedom & Justice

The Global Forum for Freedom & Justice is a proposed educational and leadership forum to connect future leaders from around the world to the lessons of the Civil Rights Movement in Alabama, as well as to universal issues of promoting political freedom, literacy, economic justice, environmental justice and criminal justice.

The project is under development by Wayne Reynolds, chairman and CEO of the Washington D.C.-based American Academy of Achievement. The facility's major feature would be a forum for the exchange of ideas, in a building that, "glows with freedom and justice," according to the design brief that Reynolds gave to English architect Norman Foster.

The site selected is on the 1600 block of 6th Avenue North, the site of the former Henley School north of Kelly Ingram Park in the Birmingham Civil Rights District. Part of the project would consist of a satellite campus for a major university, with housing for 1,000 students and faculty.

On December 15, Reynolds announced that the project had been awarded a $2.9 million grant from the U.S. Economic Development Administration, which would be used to conduct a feasibility study and to help determine a site. HUD secretary Ben Carson and White House Opportunity and Revitalization Council chair Scott Turner spoke at the announcement in Linn Park.