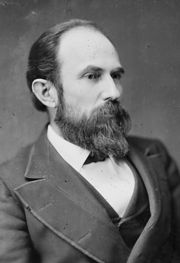 Hewitt was the grandson of Revolutionary War veteran Goldsmith Hewitt, Sr and the son of James Hewitt and his wife, the former Ellen Tarrant. He grew up on the family's farm north of Elyton and attended local schools and read law under William Mudd before going to Lebanon Law School in Tennessee. He was admitted to the Alabama State Bar in 1856 and joined the firm of Ernest & Earle before going into partnership with John Morrow. He married Morrow's daughter, Sarah in 1858.

In 1861 Hewitt enlisted as a private in Company B of the 10th Alabama Infantry and fought in the Battle of Seven Pines and the Seven Days' Battles in the vicinity of Richmond, Virginia. He was promoted to captain of Company G of the 28th Alabama Infantry in August 1862 and led fighting at Murfreesboro before suffering a severe wound on the field at Chickamauga on September 20, 1863. He survived his injury, but his wife, Sarah died that same year. In 1868 Hewitt remarried, to Harriet, the daughter of Samuel Earle and widow of H. E. Perkins. In 1870 Hewitt joined with William Walker Jr in the firm of Hewitt & Walker (now Bradley Arant Boult Cummings).

Hewitt survived and returned to the practice of law after the war's end. He was elected to the Alabama House of Representatives in 1870 and to the Alabama State Senate in the following session. During his term he won election to the United States House of Representatives, representing the 6th district in the 44th Congress. He introduced bills seeking to limit the role of federal courts in Alabama and to limit partisanship in the assessment of civil service employees. Another bill provided pensions to veterans of the Indian and Mexican Wars, as well as to Confederate veterans. He also introduced legislation to remonetize silver, to suppress polygamy, and to improve river transport in Alabama. He opposed the Reagan Interstate Commerce Bill and the auction of federal lands for mineral exploitation.

Hewitt retired from congress in 1885 and resumed the practice of law in Jasper, partnering with young Walker County solicitor John McQueen. He was re-elected to the Alabama House of Representatives in 1886. Hewitt died in 1895 and is buried at Oak Hill Cemetery.