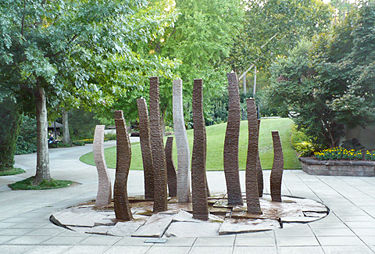 Granite Garden is a large sculpture installation created by Jesús Bautista Moroles in 1987 for the Blount Plaza at the entrance to the Birmingham Botanical Gardens. The installation was funded with a gift from Arnold and Rose Steiner and supported by a grant from the National Endowment for the Arts. It was dedicated, along with the renovated plaza, in 1988.

Moroles was born in Corpus Christi, Texas in 1950, studied at North Texas State University, and trained in Italy. He opened his professional sculpture studio in Rockport, Texas in 1981. The Birmingham commission came in 1985 and took two years to complete. "Granite Garden" consists of 45 separate sculptural elements, constructed of Texas Premier Rose granite. The stone was split into large blocks for the paved circles and carved into columns with various textures applied to the tops and sides through chipping, cutting and polishing.

The columns are formed and grouped to symbolize different levels of human interactions with the natural world. Along the entrance drive, Moroles designed polished granite bollards with deep incisions at the top, sitting on split granite bases. Just beyond that row, seeming to have "escaped" into the plaza, three bollards break the conformity with varying cuts and heights.

Next, a cluster of short columns, polished only on two sides, emerge from a circle of split-faced blocks symbolizing a balance between human interaction and the natural context. Moroles imagined a group of youngsters being lectured there at the entrance about staying with the group and not picking flowers.

The third grouping, comprised of much taller and more sinuous forms, with water flowing down their faces, evokes the natural world, stretching and twisting toward the sun. It is this third grouping which receives the most interaction from visitors who touch the wet surfaces or play between the columns.