Graymont Elementary School is a former elementary school in the Birmingham City Schools system. It was located at 300 8th Avenue West in the Graymont neighborhood.

The school was first opened in 1908 as a project of the then independent Town of Graymont. It was constructed in a classical style designed by Willam Spink.

Graymont was the first school in the Birmingham system to be integrated when James Armstrong, who had prevailed in his lawsuit, Armstrong v. Birmingham Board of Education, saw his sons Dwight and Floyd enter school on September 10, 1963 one day after they had been turned away from the door. 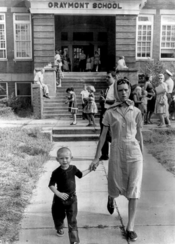 Scene during the integration of Graymont Elementary School in September 1963

After integration, Graymont Elementary became largely redundant to Hill Elementary School, which had been reconstructed in the 1950s. It closed in 1989.

In 2007 the Graymont School was added to the National Register of Historic Places.