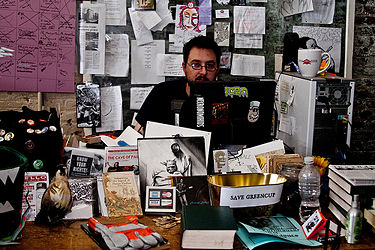 Michael Tesney behind the desk at Greencup Books. Photo by David Smith

Greencup Books was a bookstore and book publisher located at 105 Richard Arrington Jr Boulevard South. The store's grand opening was held February 8, 2008 with the release party of the book Stories from Real Life by Tony Crunk and illustrated by Peter Wilm. It closed in November 2009, following the Dia de los Muertos festival held by Bare Hands Gallery nearby.

Greencup was a not-for-profit organization founded by Russell Helms. Helms named the store for a green coffee cup, one of his few possessions from a time when he took a year off in Tuscaloosa to write. Proceeds from the book sales helped support Greencup's mission to provide free classes to the general public in areas such as creative writing, publishing, art, and music. Specialists in these areas donated time to teach the classes. They also offered lectures and workshops on a variety of subjects and hosted performances by area music, dance and spoken word artists. Cave 9 hosted performances there for a brief time after losing their space on Magnolia Avenue.

Helms and his family moved to Kentucky in July 2008, but the store remained open, run by a group of volunteers. Among those were executive director Michael Tesney. Helms planned to use the Birmingham store as a model and catalyst for other non-profit bookstores around the country.