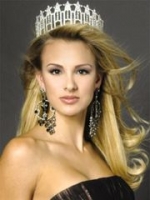 Stidham graduated from Hoover High School in 2001 and went on to complete a Bachelor of Science in Pure Mathematics and Natural Sciences at Southern Methodist University in Dallas. She attended UAB Dental School and completed her Doctorate of Dental Medicine in 2010.

Stidham was crowned by 2005 Miss Alabama USA Jessica Tinney on September 17, 2005 at the Wright Center Concert Hall at Samford University in Homewood. On April 21, 2006 she competed for the title of Miss USA 2006 in Baltimore, placing in the top 10. Her successor, Rebecca Moore, was crowned on October 1, 2006.

She was the third delegate from the state in four years to make the top ten in the nationally televised Miss USA pageant, following Michelle Arnette who was first runner-up in 2003 and Tara Darby who placed in the top ten in 2004.

Stidham was also one of twenty six Miss USA Delegates who appeared on a Miss USA special edition of Deal or No Deal in April 2006. As of 2012 she is married with one son, has a dental practice and resides in Vestavia Hills.