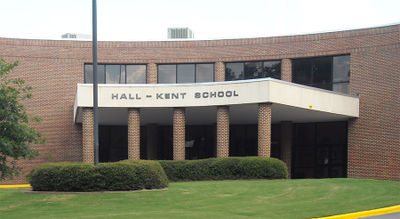 Hall-Kent Elementary School is one of three elementary schools in the Homewood School System serving grades kindergarten through fifth, located at 213 Hall Avenue. It primarily serves households in West Homewood. Enrollment in 2016 was 588 students. The principal is Kiana Coleman.

The first school in the area, to which Hall-Kent traces its roots, was Zelosophian Academy, established in the Oak Grove area by James Hugh Blair Hall in 1892. It was followed by Oak Grove Elementary School, a Jefferson County school established in the area in 1908, but which burned in 1927. Hall-Kent was built to replace the latter. Raleigh B. and Edna Mae Kent donated four lots with school officials buying a fifth lot for the new school. The four-room, wood-frame schoolhouse, which featured outdoor plumbing, was completed in 1928 and named in honor of Dr. Hall and the Kent family.

The school initially served Oak Grove, Green Springs, and Shades Mountain. The county later added bus service for students in Spaulding, Shannon, and Oxmoor. In the early 1930s, Hall-Kent was one of the first schools in Alabama to have a kindergarten program. In 1935, the Hall-Kent Improvement Association held its first fall carnival to raise money for lunchroom equipment. The carnival became a long-standing annual event.

The pot-bellied stoves were replaced by a gas heating system in the late 1940s. Enrollment increased from 93 students in 1950 to 236 in 1959, necessitating the addition of four more classrooms, an auditorium, restrooms, a teacher workroom, and principal's office during that time. The first two brick sections were added in 1955 and 1960, the latter of which included four more classrooms.

An April 1965 fire destroyed the old wood-frame section, including the library, boiler room, and lunchroom. Some portions were torn down, but the lunchroom was rebuilt as the new library. Enrollment grew to 360 by 1968, leading to large class sizes and some portable classrooms despite the building additions.